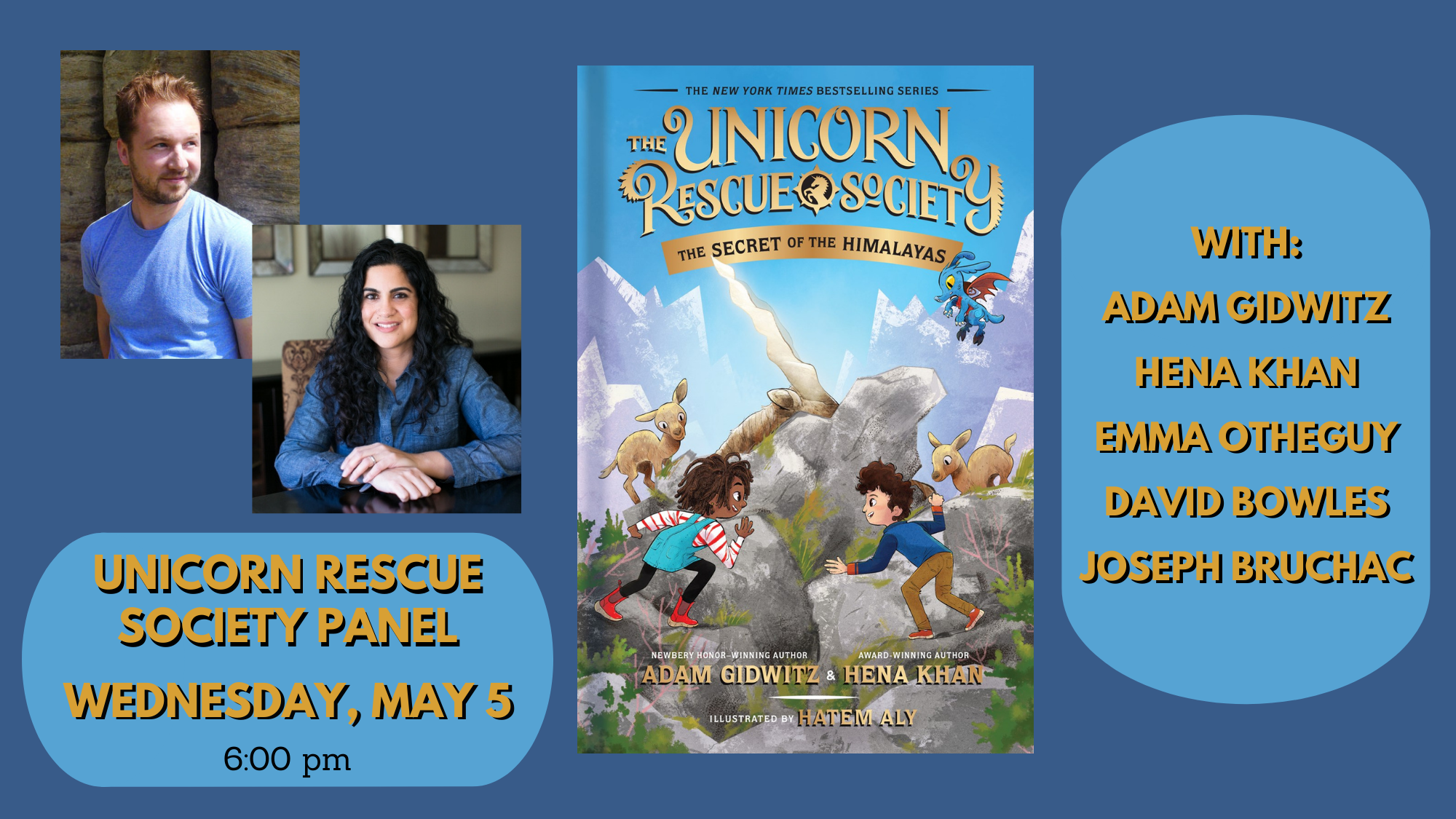 Wednesday, May 5, 2021 - 6:00 pm (click here to register for free on Crowdcast)
Scroll down to purchase Unicorn Rescue Society books and other titles from the featured authors.

Join us for a panel about all things Unicorn Rescue Society and a celebration of Book #6: The Secret of the Himalayas!

About The Secret of the Himalayas:
When Uchenna and Elliot’s classmate Pai Lu publishes an article in the school newspaper about the Schmoke Brothers’ latest scheme, Professor Fauna notices something alarming—mounted on the wall of the Schmokes’ living room is a single spiral horn that could only belong to one animal—a unicorn. Determined to stop the Schmoke Brothers from potentially poaching more creatures, the Unicorn Rescue Society is headed to Pakistan, where their next adventure is about to begin.

Adam Gidwitz is the author of the critically acclaimed, New York Times bestselling Grimm trilogy and the Unicorn Rescue Society series. He spent six years researching and writing his Newbery Honor-winning The Inquisitor’s Tale, including a year living in Europe. Adam lives with his family in Brooklyn, NY. Find Adam online at adamgidwitz.com or @AdamGidwitz.

Hena Khan is the award-winning author of the middle grade novels Amina's Voice, Amina's Song, More to the Story, and the Zayd Saleem: Chasing the Dream series, and a bunch of picture books like Golden Domes and Silver Lanterns and Under My Hijab. Hena lives in Maryland with her family but is lucky to get to travel a lot. Her favorite things are getting letters from kids, perfect cappuccinos, and reading in bed.

Emma Otheguy is the author of the bilingual picture book Martí’s Song for Freedom about Cuban poet and national hero José Martí, as well as the middle grade novel Silver Meadows Summer and the picture book A Sled for Gabo. She cowrote Unicorn Rescue Society #5: The Madre de Aguas of Cuba.

David Bowles grew up in the Río Grande Valley of South Texas. As a kid, he would regularly cross the border with his father to visit family, buy historietas, and watch movies. It’s a tradition he continued with his own children, making sure they became part of the transnational community he loves so much. David has written many books that center Mexican Americans in the borderlands, including the award-winning They Call Me Güero and the 13th Street series. He cowrote Unicorn Rescue Society #4: The Chupacabras of the Rio Grande.

Joseph Bruchac is an award-winning Abenaki poet, novelist, storyteller, and scholar of indigenous culture. His work has appeared in hundreds of publications from Akwesasne Notes and American Poetry Review to National Geographic and Parabola. He has written more than 160 books for adults and children, including Code Talker: A Novel About the Navajo Marines of World War Two, Talking Leaves, and Two Roads. He cowrote Unicorn Rescue Society #3: Sasquatch and the Muckleshoot.

The Creature of the Pines (The Unicorn Rescue Society #1) (Paperback)

Sasquatch and the Muckleshoot (The Unicorn Rescue Society #3) (Paperback)

The Secret of the Himalayas (The Unicorn Rescue Society #6) (Hardcover)

The Inquisitor's Tale: Or, The Three Magical Children and Their Holy Dog (Paperback)

A Tale Dark and Grimm (Paperback)

A Sled for Gabo (Hardcover)

Code Talker: A Novel About the Navajo Marines of World War Two (Paperback)