James Smethurst presents BEHOLD THE LAND: THE BLACK ARTS MOVEMENT IN THE SOUTH, with Regina Bradley 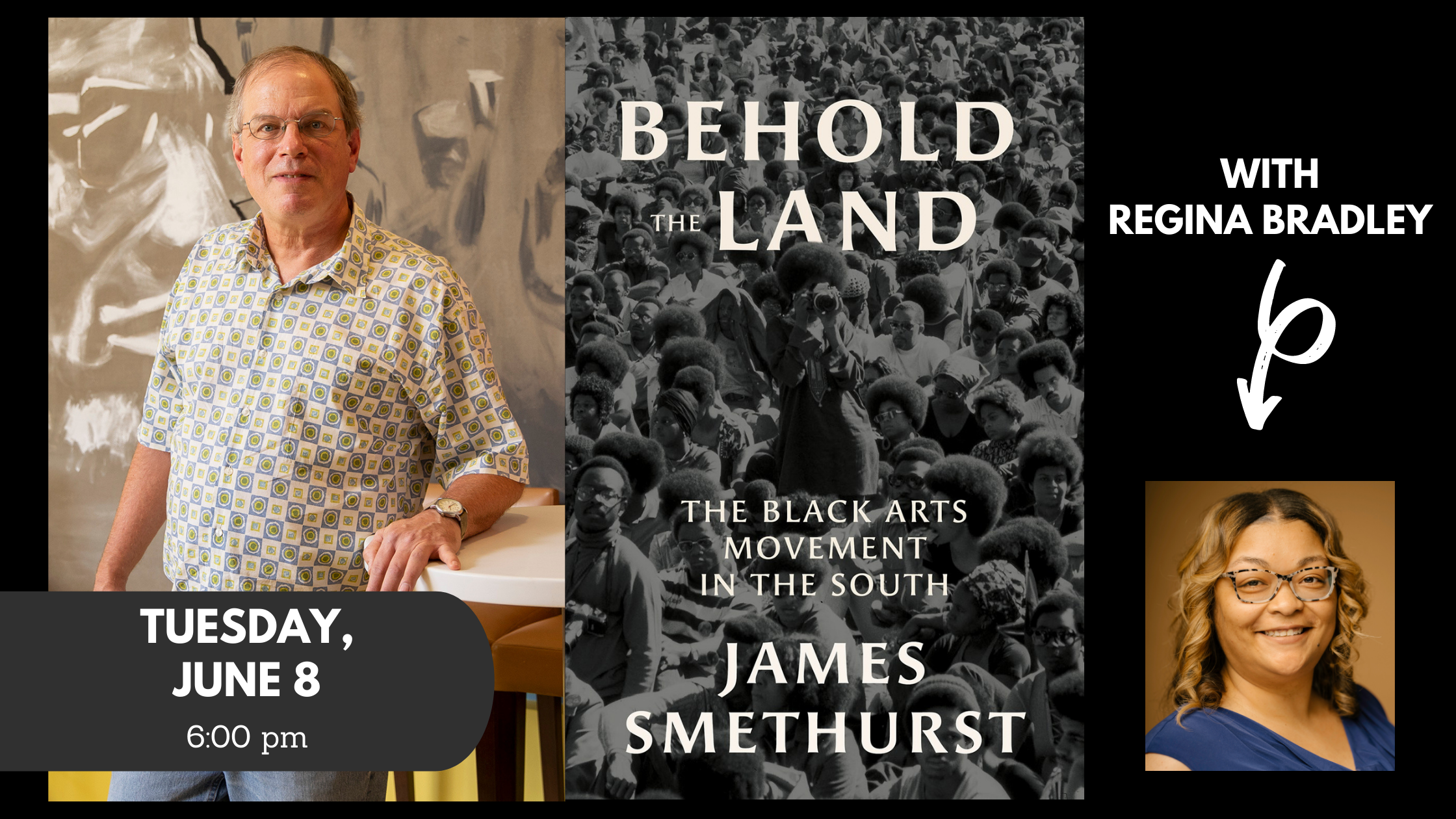 Tuesday, June 8, 2021 - 6:00 pm (click here to register via Crowdcast)
Scroll down to purchase Behold the Land, as well as other books by James Smethurst and Regina Bradley.

In the mid-1960s, African American artists and intellectuals formed the Black Arts movement in tandem with the Black Power movement, with creative luminaries like Amiri Baraka, Gwendolyn Brooks, Toni Cade Bambara, and Gil Scott-Heron among their number. In this follow-up to his award-winning history of the movement nationally, James Smethurst investigates the origins, development, maturation, and decline of the vital but under-studied Black Arts movement in the South from the 1960s until the early 1980s. Traveling across the South, he chronicles the movement's radical roots, its ties to interracial civil rights organizations on the Gulf Coast, and how it thrived on college campuses and in southern cities. He traces the movement's growing political power as well as its disruptive use of literature and performance to advance Black civil rights.

Though recognition of its influence has waned, the Black Arts movement's legacy in the South endures through many of its initiatives and constituencies. Ultimately, Smethurst argues that the movement's southern strain was perhaps the most consequential, successfully reaching the grassroots and leaving a tangible, local legacy unmatched anywhere else in the United States.

Dr. James Smethurst is professor of Afro-American Studies at the University of Massachusetts Amherst and author of The Black Arts Movement: Literary Nationalism in the 1960s and 1970s.

Dr. Regina N. Bradley is an alumna Nasir Jones HipHop Fellow, Assistant Professor of English and African Diaspora Studies at Kennesaw State University, and co-host of the critically acclaimed southern hip hop podcast Bottom of the Map with music journalist Christina Lee. Dr. Bradley is one of the foremost authorities on contemporary Black culture in the American South and is the author of Chronicling Stankonia: The Rise of the Hip-Hop South (UNC Press), which explores how hip hop duo OutKast influences the culture of the Black American South in the long shadow of the Civil Rights Movement.

Behold the Land: The Black Arts Movement in the South (Paperback)

The Black Arts Movement: Literary Nationalism in the 1960s and 1970s (Paperback)

Chronicling Stankonia: The Rise of the Hip-Hop South (Paperback)