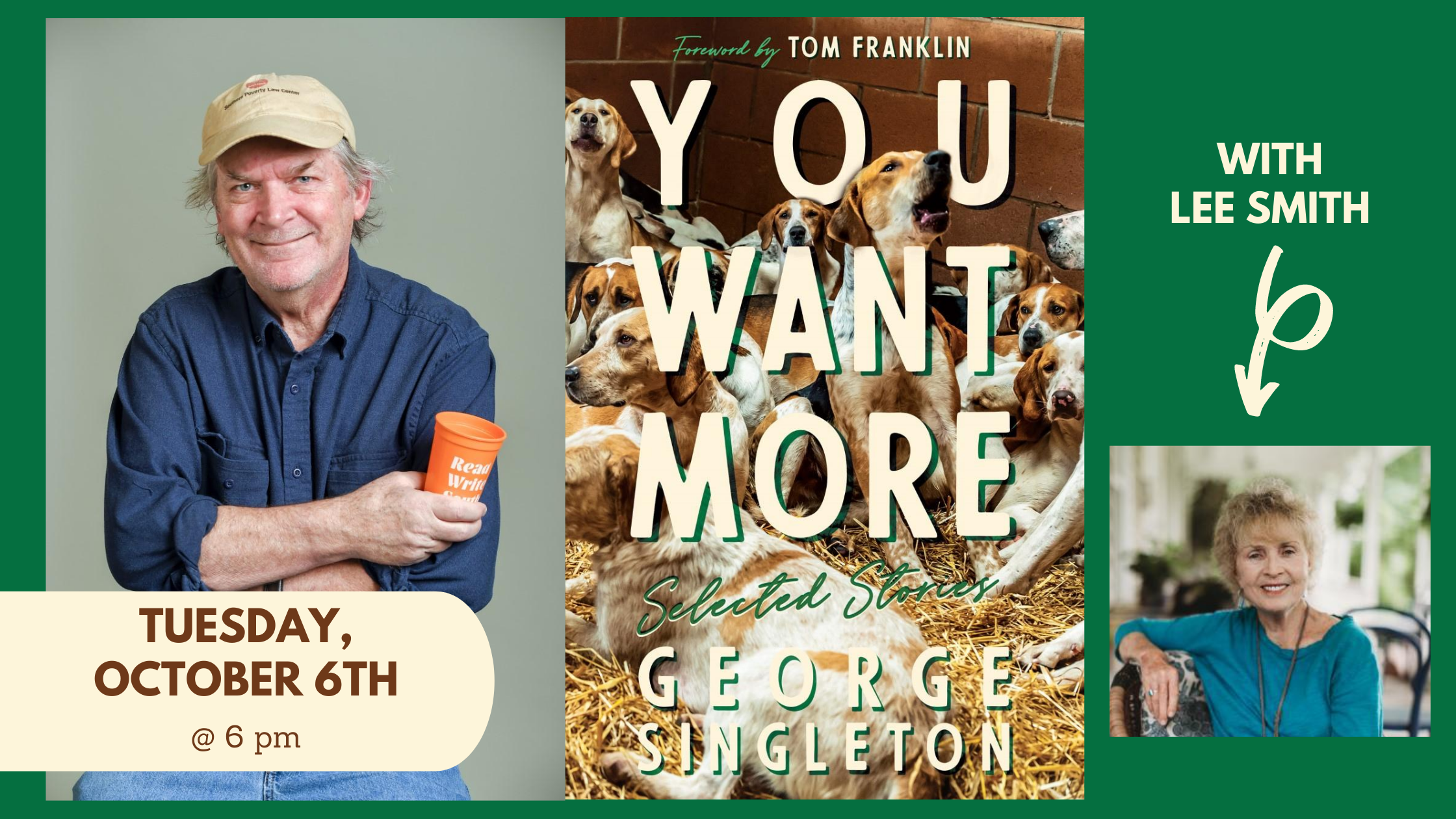 Tuesday, 10/6 at 6 pm (click here to register via Crowdcast)

Thirty stories, collected in one volume for the very first time, from one of the South's best known and most acclaimed short story writers.

With his signature darkly acerbic and sharp-witted humor, George Singleton has built a reputation as one of the most astute and wise observers of the South. Now Tom Franklin introduces this master of the form with a compilation of acclaimed and prize-winning short fiction spanning twenty years and eight collections, including stories originally published in outlets like the Atlantic Monthly, Harper's, Playboy, the Georgia Review, the Southern Review, and many more. A lovelorn and chatty euthanasia vet arrives at a couples’ house to put down their dog, Probate; a father-to-be searches his workplace—a bar—for a replacement sonogram after recording an episode of Bonanza over the original; an unlikely romance sparks between a librarian and a professional bowler while they compete to win an RV; a father takes his son to visit the many ex-girlfriends that could have been his mother.

These stories bear the influence of Flannery O’Connor and Raymond Carver, at other times Lewis Nordan and Donald Barthelme, and touch on the mysteries of childhood, the complexities of human relationships, and the absurdity of everyday life, its inexorable defeats and small triumphs. Assembled here for the very first time, You Want More showcases the body of work, hilarious and incisive, that has cemented George Singleton’s place among the South’s greatest living writers.

George Singleton has published eight collections of stories, two novels, and a book of writing advice. Over 200 of his stories have appeared in magazines such as the Atlantic Monthly, Harper's, Playboy, the Georgia Review, the Southern Review, the Cincinnati Review, and elsewhere. He is the recipient of a Pushcart Prize, a Guggenheim fellowship, the Hillsdale Award from the Fellowship of Southern Writers, and the Corrington Award for Literary Excellence. He lives in Spartanburg, SC, where he holds the John C. Cobb Chair in Humanities at Wofford College.

Born in the small coal-mining town of Grundy, Virginia, Lee Smith began writing stories at the age of nine and selling them for a nickel apiece. Since then, she has written seventeen works of fiction, including Fair and Tender Ladies, Oral History, and, most recently, Guests on Earth. She has received many awards, including the North Carolina Award for Literature and an Academy Award in Fiction from the American Academy of Arts and Letters; her novel The Last Girls was a New York Times bestseller as well as winner of the Southern Book Critics Circle Award. She lives in Hillsborough, North Carolina, with her husband, the writer Hal Crowther.