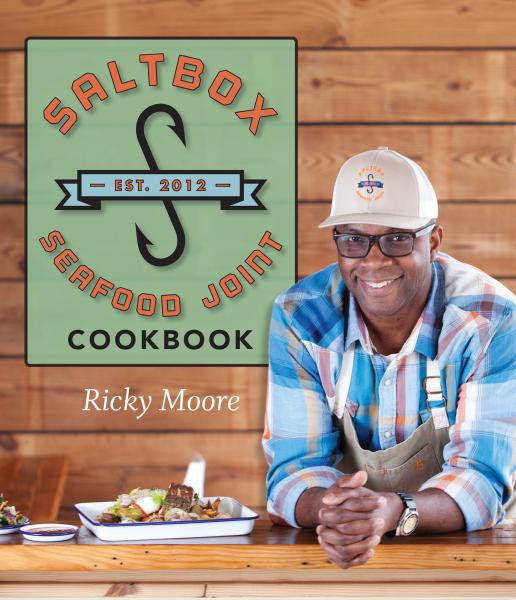 Ricky Moore was born and reared in the North Carolina coastal town of New Bern, where catching and eating fresh fish and shellfish is what people do. Today, Moore is one of the most widely admired chefs to come out of the region. In this cookbook, he tells the story of how he started his wildly popular Saltbox Seafood Joint® restaurants and food truck in Durham, North Carolina. Moore, a formally trained chef, was led by a culinary epiphany in the famous wet markets of Singapore to start a restaurant focused purely on the food inspired by the Carolina coast and its traditional roadside fish shacks and camps. Saltbox Seafood Joint’s success is a testament to Moore’s devotion to selecting the freshest seasonal ingredients every day and preparing them perfectly.

In sixty recipes that celebrate his coastal culinary heritage, Moore instructs cooks how to prepare Saltbox Seafood Joint dishes. This cookbook, written with K. C. Hysmith, explains how to pan-fry and deep-fry, grill and smoke, and cook up soups, chowders, stews, and grits and seafood. Moore has taken pity on us and even included the recipe for his famous Hush-Honeys®, an especially addictive hushpuppy. Charts and illustrations in the book explain the featured types, availability, and cuts of fish and shellfish used in the recipes.

Ricky Moore is the founder, proprietor, and chef of Saltbox Seafood Joint in Durham, North Carolina.