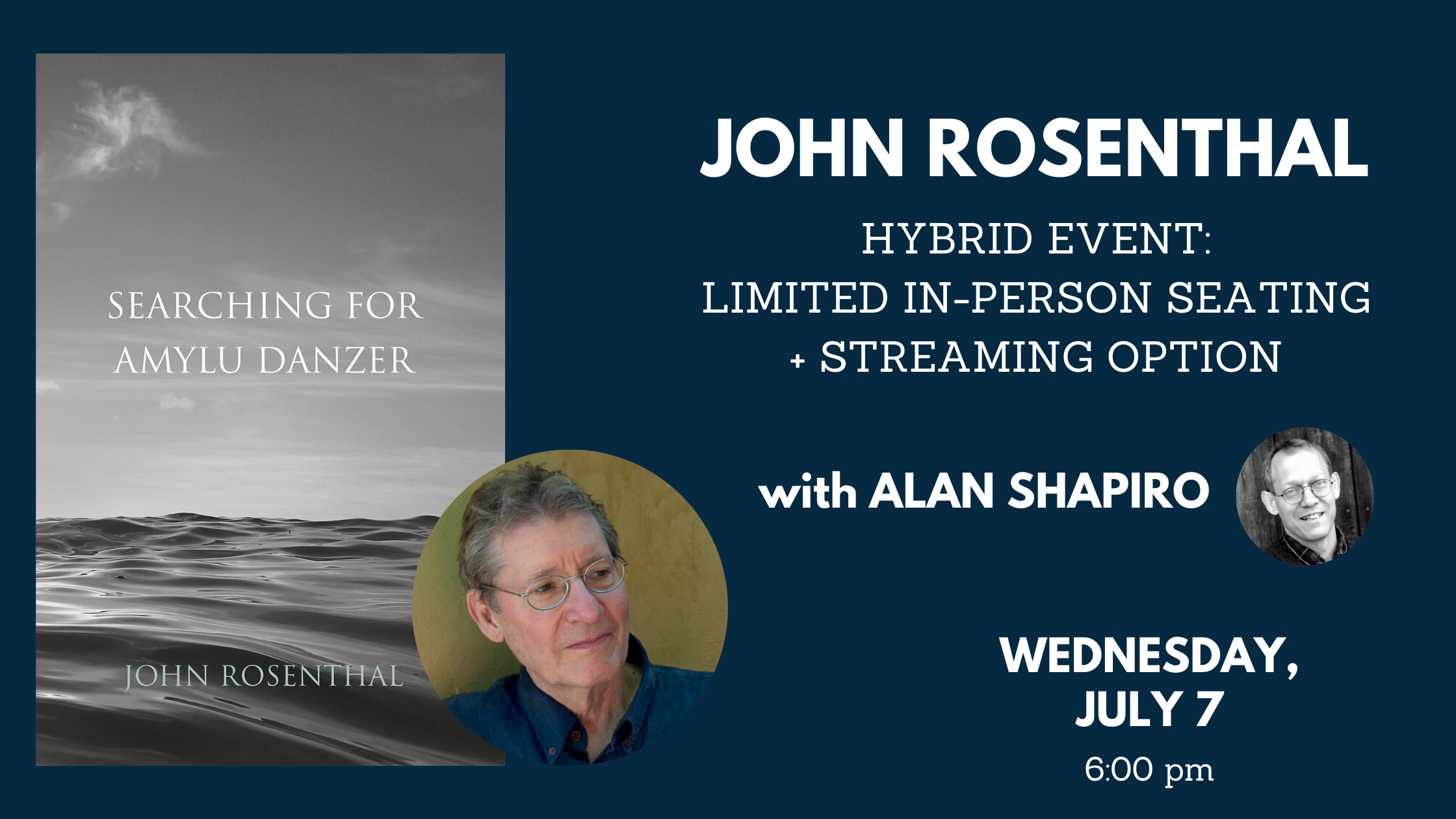 Wednesday, July 7, 2021 - 6:00 pm (click here to register for the Facebook livestream)
Scroll to the bottom of this webpage to purchase your copy of Searching for Amylu Danzer

This will be a hybrid event with in-person & virtual options. Flyleaf will offer seating for up to thirty in-person guests, with priority access given to folks who purchase the book. If you preorder a copy through Flyleaf, please use your order comments to indicate whether you would like 1-2 seats held for you at the in-person event. We will contact you to confirm the reservation prior to the event. For virtual guests, please click the link above to access our Facebook livestream.

On the afternoon of February 24th, 1965, Amylu Danzer, a twenty-year-old art student who'd been visiting Jones Beach on Long Island, went missing. A month later, her body was swept ashore some sixteen miles away, at Far Rockaway. In this tender, courageous, and compellingly written memoir, the writer and photographer John Rosenthal looks back on his youthful friendship with Amylu, and, drawing on multiple sources—amongst them his own journals, the testimony of her family and some of the people with whom she studied, newspaper reports of her death, and the eyewitness account of one of the men who found her body—he seeks to answer some of the questions which have haunted him ever since he first learned of her death—questions which were either too easily dismissed or else were too easily answered at the time. Searching for Amylu Danzer is a powerful and unillusioned book, and in writing it Rosenthal has ensured that however short her life was, Amylu Danzer will not be counted as one of those "which have no memorial...and are become as though they have never been born."

John Rosenthal was born in New York City in 1942. He received his BA from Wake Forest College in 1964, and an MA in English Literature from Columbia University in 1966. He taught English at the University of North Carolina-Chapel Hill until 1971 when he left teaching to become an essayist and a photographer. His work has been widely exhibited in the United States, including exhibitions at The National Humanities Center, The National Academy of Sciences in Washington D.C., and Boston's Panopticon Gallery. His articles have appeared in many journals and magazines, amongst them The Sun Magazine, Five Points and The Huffington Post. In 1998 a collection of Mr. Rosenthal's photographs, Regarding Manhattan, was published by Safe Harbor Books, and in 2015 Safe Harbor published his 2007 collection of New Orleans photographs, AFTER: The Silence of the Lower 9th Ward. In the 1990s, Mr. Rosenthal was a regular commentator on NPR's All Things Considered.

Alan Shapiro is the author of many books of poetry, two memoirs, a novel, a book of critical essays, and two translations. His awards include the Kingsley Tufts Award, 2 NEAs, a Guggenheim and a Lila Wallace Reader’s Digest Award. His newest book of poems, Against Translation, was published in 2019 from University of Chicago Press. He is the William R. Kenan, Jr. Distinguished Professor of English and Creative Writing at the University of North Carolina.