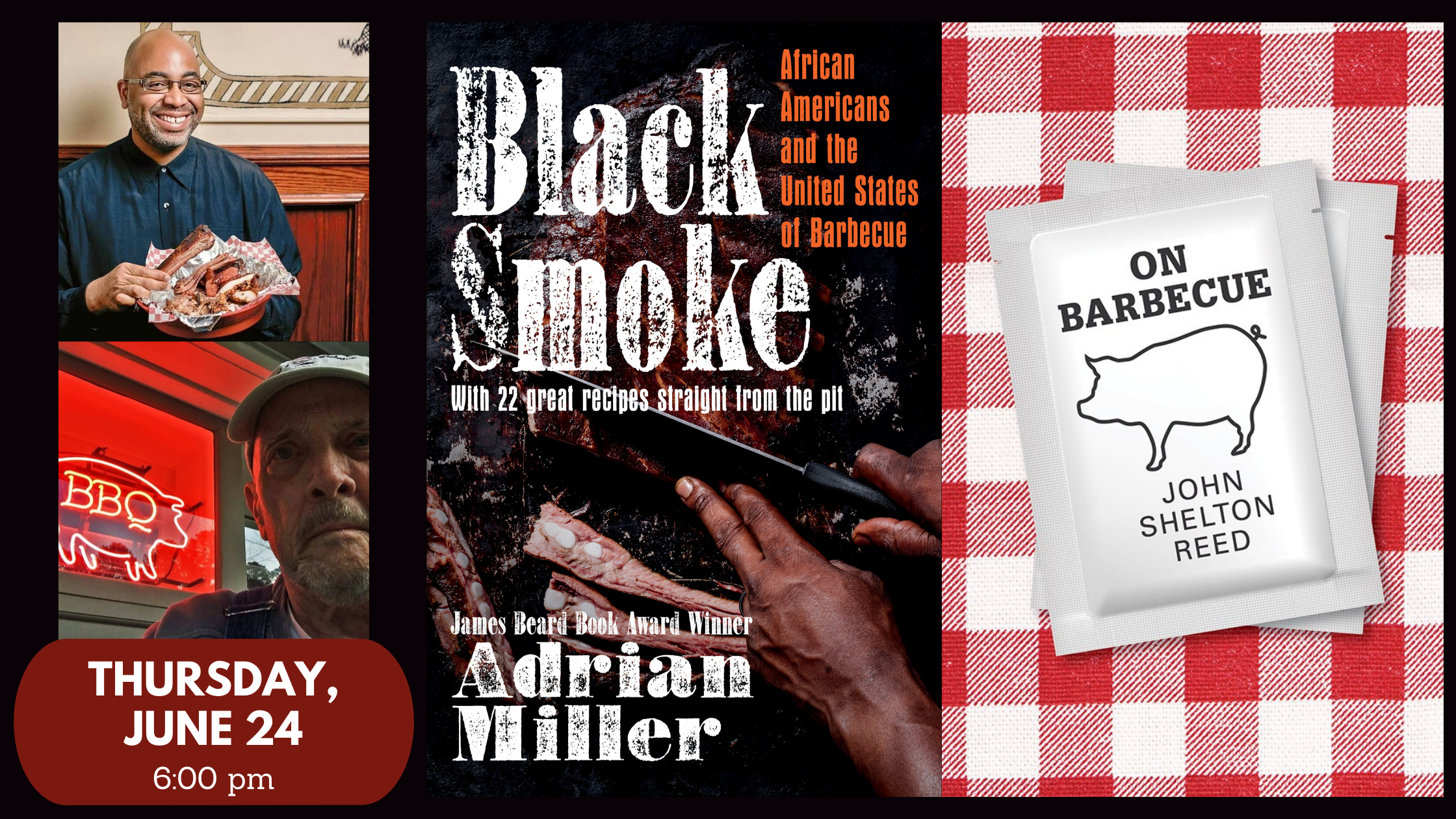 Thursday, June 24, 2021 - 6:00 pm (click here to register via Crowdcast)
Scroll to the bottom of this webpage to purchase titles by Adrian Miller & John Shelton Reed

John Shelton Reed is one of today’s most knowledgeable authors on the subject of barbecue. Holy Smoke: The Big Book of North Carolina Barbecue, written with his wife, Dale Volberg Reed, won the National Barbecue Association Award of Excellence in 2017 and was a finalist for the 2009 International Associate of Culinary Professionals Cookbook Award. In this collection, On Barbecue, Reed compiles reviews, essays, magazine articles, op-eds, and book extracts from his many-year obsession with the history and culture of barbecue. Brought together, these pieces constitute a broad look at the cultural, culinary, historical, and social aspects of this American institution.

Reed’s original and provocative voice carries through this collection, which spans more than twenty years of barbecue lore. A lover of tradition whose study of regional distinctions has made him prize and defend them, Reed writes with conviction on what “real” barbecue looks, smells, and tastes like. He delves into the history of barbecue and even the origins of the word barbecue itself. Other topics include present-day barbecue, Carolina ’cue and other regional varieties, and recipes daring readers to master their own backyard barbecues.

Anyone with an interest in this signature American food will find themselves immersed in this book’s accessible, conversational, and frequently tart pages. From one of the wittiest and most knowledgeable authors writing on the subject, On Barbecue is essential reading.

About Black Smoke: African Americans and the United States of Barbecue

Across America, the pure love and popularity of barbecue cookery have gone through the roof. Prepared in one regional style or another, in the South and beyond, barbecue is one of the nation's most distinctive culinary arts. And people aren't just eating it; they're also reading books and articles and watching TV shows about it. But why is it, asks Adrian Miller—admitted 'cuehead and longtime certified barbecue judge—that in today's barbecue culture African Americans don't get much love?

In Black Smoke, Miller chronicles how Black barbecuers, pitmasters, and restauranteurs helped develop this cornerstone of American foodways and how they are coming into their own today. It's a smoke-filled story of Black perseverance, culinary innovation, and entrepreneurship. Though often pushed to the margins, African Americans have enriched a barbecue culture that has come to be embraced by all. Miller celebrates and restores the faces and stories of the men and women who have influenced this American cuisine. This beautifully illustrated chronicle also features 22 barbecue recipes collected just for this book.

John Shelton Reed has written a dozen books, innumerable articles, and a country song about the South (and some stuff about other topics). His writing has been described by the Washington Post as "provocative, instructive and amusing," and by the San Francisco Review as "funny and erudite and annoying." He has been Chancellor of the Fellowship of Southern Writers and is co-founder and Éminence Grease of the Campaign for Real Barbecue. ​For some years he taught at UNC, where he helped to found UNC's Center for the Study of the American South and was co-founder of the quarterly SouthernCultures.

Adrian Miller is a certified Kansas City Barbecue Society judge and recipient of a James Beard Foundation Book Award for Soul Food: The Surprising Story of an American Cuisine, One Plate at a Time. A consultant on Netflix's Chef's Table BBQ, Miller's most recent book is The President's Kitchen Cabinet: The Story of the African Americans Who Have Fed Our First Families, from the Washingtons to the Obamas.

The President's Kitchen Cabinet: The Story of the African Americans Who Have Fed Our First Families, from the Washingtons to the Obamas (Paperback)

Soul Food: The Surprising Story of an American Cuisine, One Plate at a Time (Paperback)