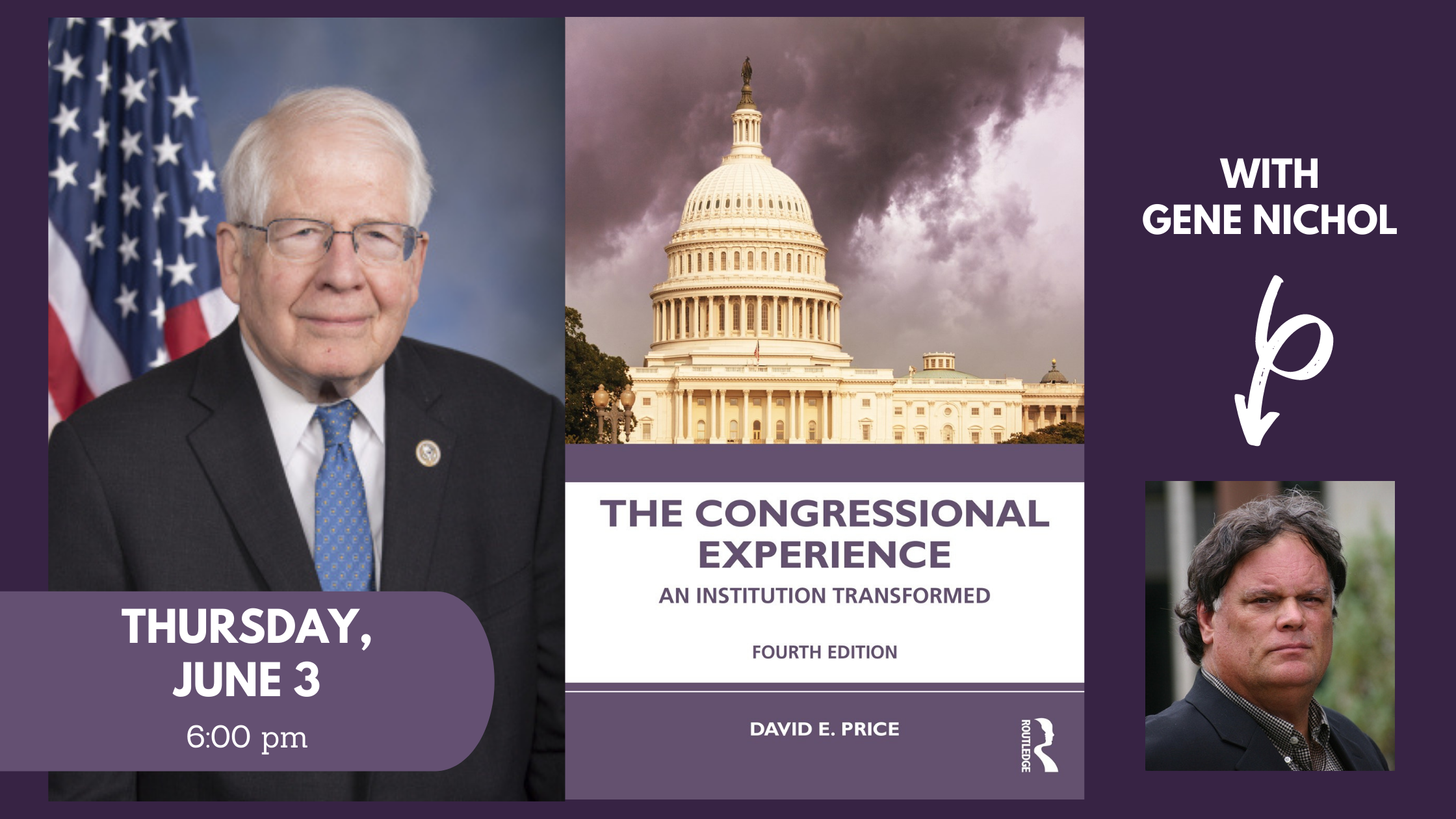 Thursday, June 3, 2021 - 6:00 pm (click here to register via Crowdcast)
Scroll to the bottom of this page to purchase books by Rep. Price & Gene Nichol.

Congressman David Price is uniquely qualified to guide readers through the labyrinth of rules, roles, and representatives that is Congress. As a trained political scientist, he connects the practical politics on the Hill with the theories of the discipline. He is equally focused on the ethics of public service at a time when politics seem to have reached a new low. Through it all, he conveys a clear sense of the challenges, disappointments, elations, and deep concerns implicit in serving as a member of Congress--especially at a time of national and international fragility.

New to the 4th Edition:

• Covers elections and presidencies since the third edition, including serving with Obama and Trump.

• Details the Trump impeachment process and the subsequent pandemic bringing change to Congressional floor voting processes, putting current crises in context with prior occasions during the Clinton and George W. Bush presidencies.

• Looks at the reform agenda and the prospects for national political renewal.

David Price represents North Carolina's Fourth District  -- a rapidly growing, research-and-education-focused district that includes Durham, Franklin, Granville and Orange counties as well as parts of Chatham, Wake, and Vance counties. He received his undergraduate degree at UNC-Chapel Hill and went on to Yale University to earn a Bachelor of Divinity and Ph.D. in Political Science. Before he began serving in Congress in 1987, Price was a professor of Political Science and Public Policy at Duke University. He is the author of four books on Congress and the American political system.

Price currently serves on the House Appropriations Committee and is the Chairman of the Transportation, Housing and Urban Development Appropriations Subcommittee. He also serves on the House Budget Committee and is a member of the Appropriations subcommittees on homeland security, State Department, and foreign operations. He is a recognized leader in foreign policy, serving as the Chairman of the House Democracy Partnership, which he initiated to help strengthen parliaments in emerging democracies. In North Carolina, David's constituents know him as a strong supporter of education, accessible health care, affordable housing, clean air and water, and improved transportation alternatives.

David is a native of Erwin, Tennessee. He and his wife Lisa live in Chapel Hill and are parents of two children and three grandchildren.

Gene R. Nichol is a law professor, editorial commentator, and author of The Faces of Poverty in North Carolina: Stories from Our Invisible Citizens (UNC Press, 2018) and a number of other books. He writes commentary for Raleigh News and Observer, Charlotte Observer, the Progressive Populist, and others. He is the Boyd Tinsley distinguished professor of law at the University of North Carolina. He was director of the UNC Poverty Center until it was closed by the UNC Board of Governors for publishing articles critical of the governor and General Assembly. Since 2015, his research has been supported by the North Carolina Poverty Research Fund. Nichol was president of the College of William & Mary (2005-2008), law dean at the University of Colorado (1988-1995), and dean at UNC from 1999-2005.

The Faces of Poverty in North Carolina: Stories from Our Invisible Citizens (Hardcover)