Steven Petrow presents STUPID THINGS I WON'T DO WHEN I GET OLD, with Daniel Wallace 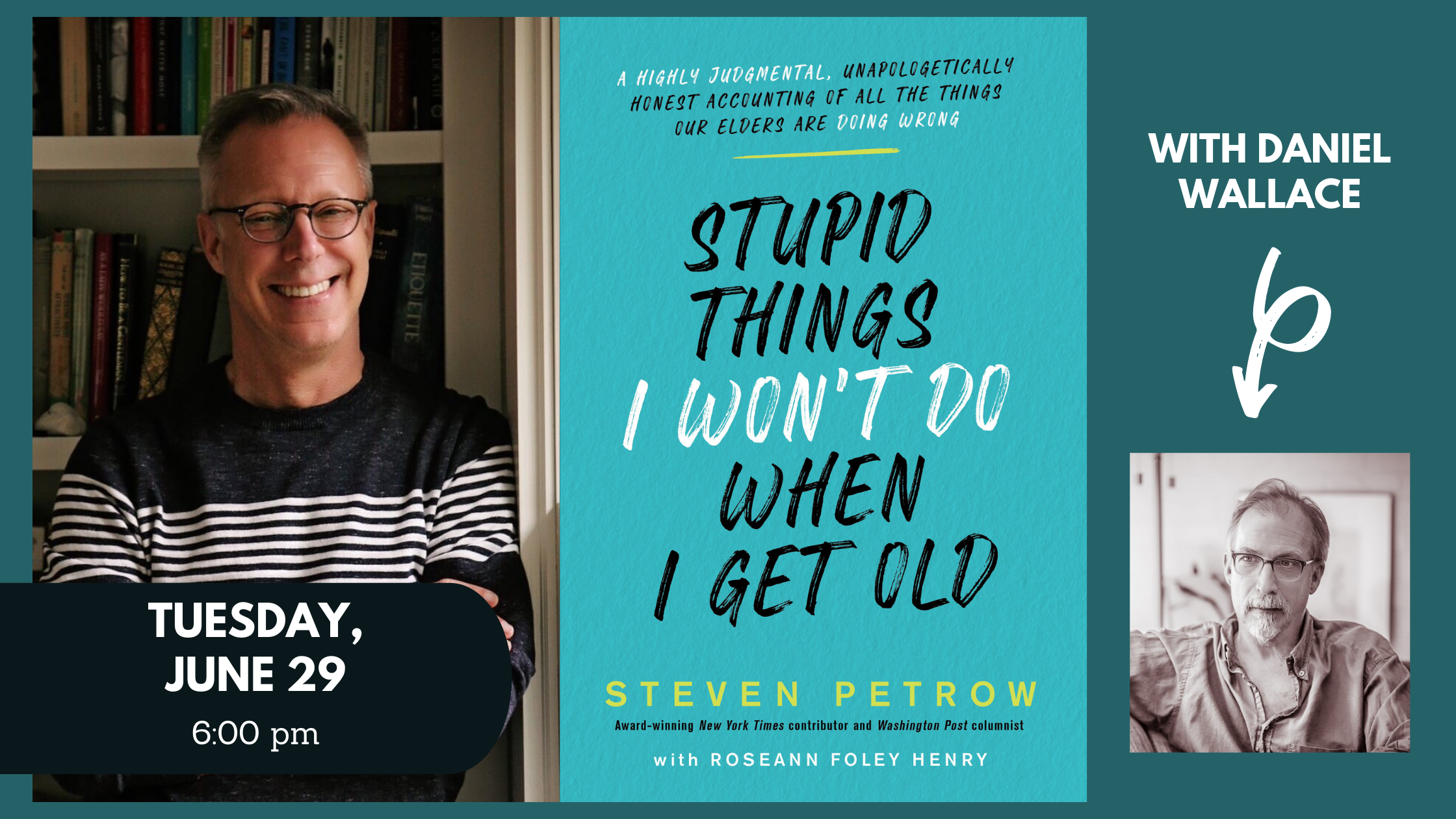 Tuesday, June 29, 2021 - 6:00 pm (click here to register for the Facebook livestream)
Scroll to the bottom of this webpage to purchase titles by Steven & Daniel.

This will be a hybrid event with in-person & virtual options. Flyleaf will offer seating for up to thirty in-person guests, with priority access given to folks who purchase the book. *Sorry, we have reached our capacity limit for in-person guest reservations!* For virtual guests, please click the link above to access our Facebook livestream.

Soon after his 50th birthday, Petrow began assembling a list of “things I won’t do when I get old”—mostly a catalog of all the things he thought his then 70-something year old parents were doing wrong. That list, which included “You won’t have to shout at me that I’m deaf,” and “I won’t blame the family dog for my incontinence,” became the basis of this rousing collection of do’s and don’ts, wills and won’ts that is equal parts hilarious, honest, and practical.

The fact is, we don’t want to age the way previous generations did. “Old people” hoard. They bore relatives—and strangers alike—with tales of their aches and pains. They insist on driving long after they’ve become a danger to others (and themselves). They eat dinner at 4pm. They swear they don’t need a cane or walker (and guess what happens next). They never, ever apologize. But there is another way…

In Stupid Things I Won’t Do When I Get Old, Petrow candidly addresses the fears, frustrations, and stereotypes that accompany aging. He offers a blueprint for the new old age, and an understanding that aging and illness are not the same. As he writes, “I meant the list to serve as a pointed reminder—to me—to make different choices when I eventually cross the threshold to ‘old.’”

Getting older is a privilege. This essential guide reveals how to do it with grace, wisdom, humor, and hope. And without hoarding.

Steven Petrow is an award-winning journalist and author best known for his Washington Post and New York Times essays on aging, health, and cancer, which often appear on the “Most Read” lists. He’s currently an Opinion Columnist for USA Today, a columnist to The Post, and a contributing writer The Times. Previously he penned The New York Times’ “Civil Behavior” advice column and “Digital Dilemmas” for Parade magazine; his work has been published in Time, The Atlantic, Salon, the Daily Beast, the Los Angeles Times, and The Advocate. You’ve likely heard him on NPR’s “All Things Considered Weekend,” or one of your favorite TV networks. The most recent of his five books is Steven Petrow’s Complete Gay & Lesbian Manners and his TED Talk, “3 Ways to Practice Civility,” has garnered nearly two million views to date. He lives in Hillsborough, NC and can be found online at StevenPetrow.com

Daniel Wallace is author of six novels, including Big Fish (1998), Ray in Reverse (2000), The Watermelon King (2003), Mr. Sebastian and the Negro Magician (2007), The Kings and Queens of Roam (2013), and most recently Extraordinary Adventures (May 2017). He is the J. Ross MacDonald Distinguished Professor of English at the University of North Carolina at Chapel Hill, his alma mater, where he directs the Creative Writing Program.

Stupid Things I Won't Do When I Get Old: A Highly Judgmental, Unapologetically Honest Accounting of All the Things Our Elders Are Doing Wrong (Hardcover)