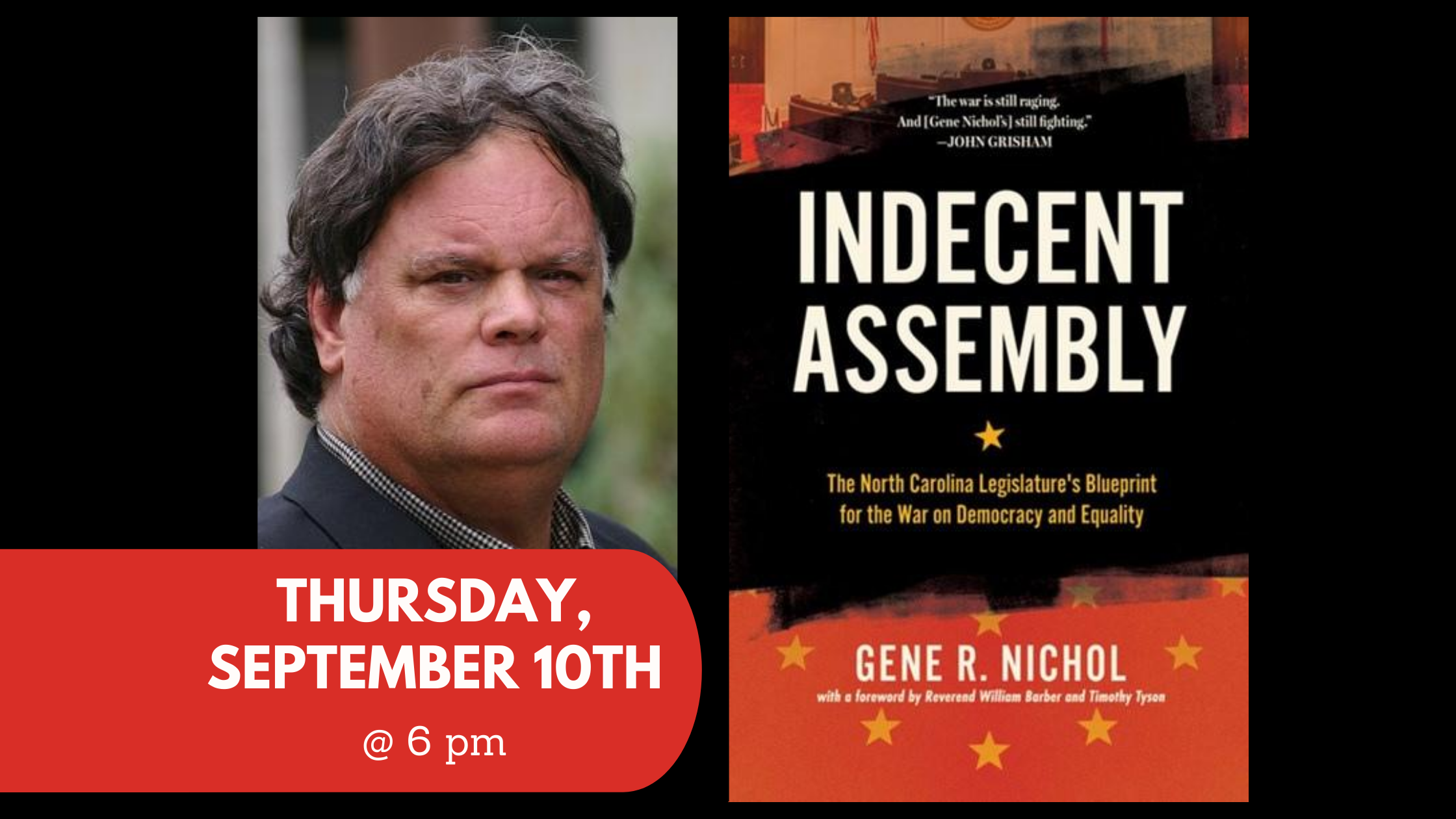 Thursday, 9/10 at 6 pm (click here to register via Crowdcast)

Find links to purchase signed copies of Indecent Assembly and The Faces of Poverty in NC at the bottom of this webpage.

North Carolina has, since 2013, undergone a greater political sea change than any other state. For the first time, seven years ago, state government became completely captured by a radicalized and aggressive Republican leadership determined to produce the most ultra-conservative political regime in the nation. In a remarkably brief time span, Republican lawmakers have moved successfully toward that goal. The New York Times refers to the project as “North Carolina’s pioneering work in bigotry.” Other states have begun to follow what they expressly deemed the “North Carolina playbook.”

Indecent Assembly lays out in detail, and with no small dose of passion, the agenda, purposes, impacts, and transgressions of the Republican North Carolina General Assembly since it came to dominate life in the Tar Heel State. Nichol outlines, without holding punches, the stoutest war waged against people of color and low-income citizens seen in America for a half-century. All-white Republican caucuses, dominating both houses of the General Assembly, have behaved essentially like a White People’s Party, without the nomenclature. Bold steps have also been taken to diminish the equal dignity of women and an internationally famed crusade against LGBTQ+ Tar Heels has capped off what has become a state-based battle against the Fourteenth Amendment. But the Republican General Assembly has not stopped with substantive legal changes. It has attacked the fundaments of American constitutional government. In 2019, the state of North Carolina, in short, is involved in a brutal battle for its own decency. If the contest is lost here, other states will likely abandon defining cornerstones of American liberty and equality as well. North Carolina today is not presented with the mere give and take of normal politics. It struggles over its meaning as a commonwealth and its future as a democracy.

Gene R. Nichol is a law professor, commentator, and author of The Faces of Poverty in North Carolina: Stories from Our Invisible Citizens. He was director of the UNC Poverty Center until it was closed by the UNC Board of Governors for publishing articles critical of the then governor and General Assembly. Since 2015, his research has been supported by the North Carolina Poverty Research Fund.