David Menconi presents STEP IT UP AND GO, in conversation with Jon Wurster (Superchunk) and Tom Maxwell (Squirrel Nut Zippers) 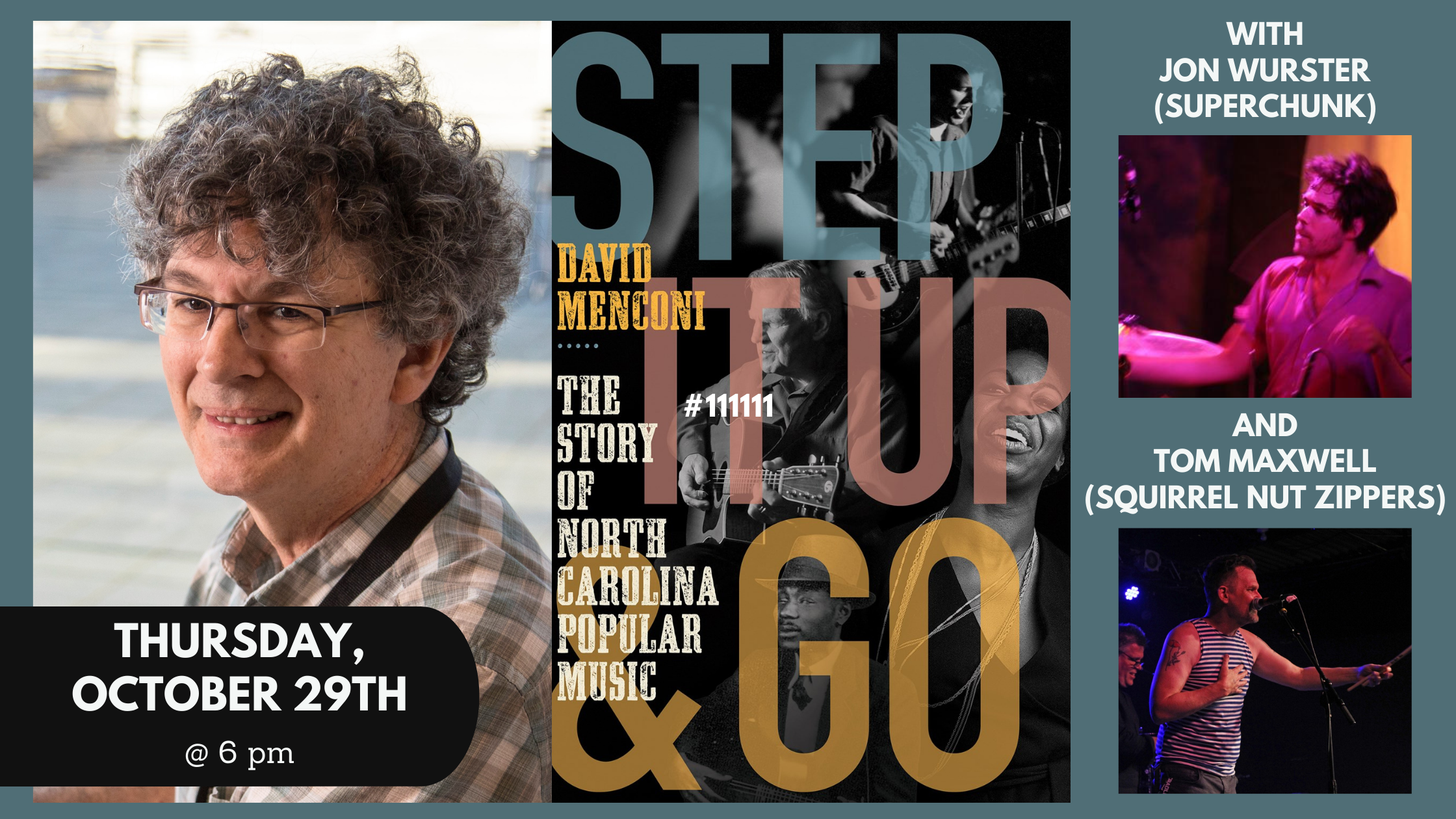 This book is a love letter to the artists, scenes, and sounds defining North Carolina's extraordinary contributions to American popular music. David Menconi spent three decades immersed in the state's music, where traditions run deep but the energy expands in countless directions. Menconi shows how working-class roots and rebellion tie North Carolina's Piedmont blues, jazz, and bluegrass to beach music, rock, hip-hop, and more. From mill towns and mountain coves to college-town clubs and the stage of American Idol, Blind Boy Fuller and Doc Watson to Nina Simone and Superchunk, Step It Up and Go celebrates homegrown music just as essential to the state as barbecue and basketball.

Spanning a century of history from the dawn of recorded music to the present, and with sidebars and photos that help reveal the many-splendored glory of North Carolina's sonic landscape, this is a must-read for every music lover.

Music critic and journalist David Menconi spent twenty-eight years as staff writer at the Raleigh News and Observer. His most recent book (with Ray Benson) is Comin' Right at Ya: How a Jewish Yankee Hippie Went Country, or the Often Outrageous History of Asleep at the Wheel.
Jon Wurster has been the drummer for Chapel Hill indie rock legends Superchunk since 1991. He's also the man behind the kit for the Mountain Goats and punk-pop pioneer Bob Mould. Though he barely graduated high school, Wurster has written articles for McSweeney's, Rolling Stone, The Village Voice, Modern Drummer, Spin and other publications. Wurster has written for TV shows like Monk, Tim and Eric's Awesome Show, Great Job! and Squidbillies, and his voice can be heard in episodes of The Simpsons, Steven Universe, Documentary Now!, Adventure Time as well as audiobooks by Chuck Klosterman and Michael Azerrad. Wurster is one half of the radio/podcast comedy team Scharpling and Wurster.
Tom Maxwell is a writer and musician. He was a member of the Squirrel Nut Zippers between 1994 and 1999. Tom’s song “Hell” peaked at Number 13 on the Billboard Hot 100, propelling the band to multi-platinum status. His songs have appeared in dozens of movies and television shows, a Super Bowl commercial, an Academy Award-nominated documentary and the Tony Award-winning soundtrack. He has also scored for movies, television and commercials. A contributor to Al Jazeera America and Longreads, Maxwell’s writing has also appeared in Slate, Salon, The Bitter Southerner, Our State Magazine, College Music Journal, Southern Cultures, and The Oxford American, among others. He's a faculty member of the North Carolina Writers Network as well as a recent inductee to the North Carolina Music Hall of Fame.
Event date:
Thursday, October 29, 2020 - 6:00pm to 7:00pm
Event address:

Step It Up and Go: The Story of North Carolina Popular Music, from Blind Boy Fuller and Doc Watson to Nina Simone and Superchunk (Hardcover)

Comin' Right at Ya: How a Jewish Yankee Hippie Went Country, or, the Often Outrageous History of Asleep at the Wheel (Brad and Michele Moore Roots Music Series) (Hardcover)