Sebastian Matthews presents BEYOND REPAIR, in conversation with Daniel Wallace 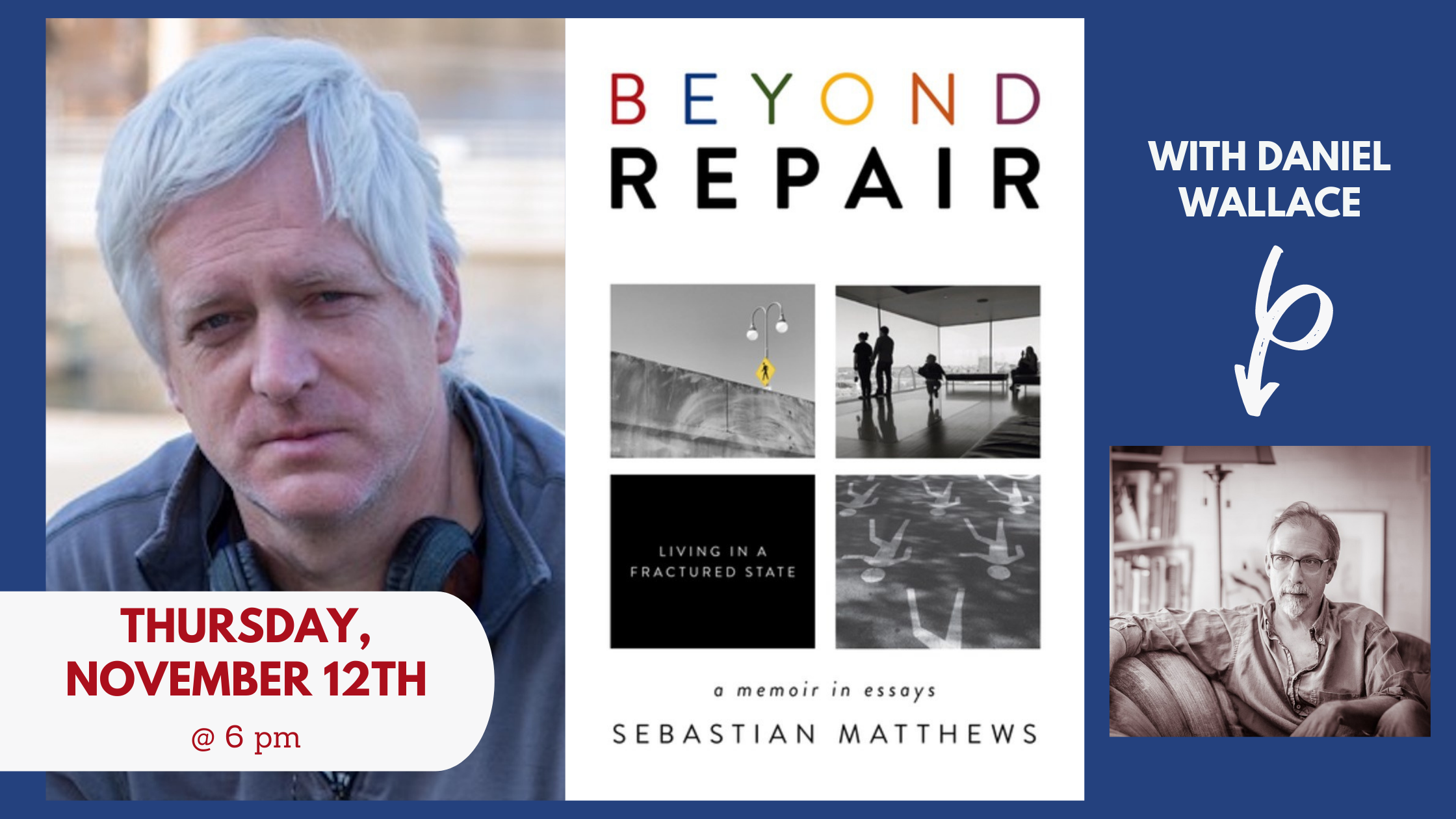 After recovering from a head-on collision and its attendant trauma, the author struggles to reconnect to a world in the throes of a form of cultural PTSD.

In 2011, my family was in a major car accident. We were hit head-on by a man in the throes of a heart attack. It took three years to recover from our injuries, and a couple more to deal with the aftereffects of trauma. When I finally returned to the world—as father and husband, friend and brother, writer and citizen—it became clear that our society was in its own traumatized state—reeling from the string of police shootings of unarmed African Americans, stunned by yet one more mass shooting. The people around me were displaying all the signs of PTSD—jumpiness, irritability, numbness—and, concordantly, my interactions out in daily life were becoming more dysfunctional, at times downright hostile. Us against them. Red vs. blue. Black vs. white. Rich vs. poor. That we were living in a progressive town inside a conservative county in the Mountain South only made things more volatile. I decided that if we were all living in a fractured society no longer recognizable, then it was up to me to re-engage in it. I would enter into encounters with people as conscious as possible of the potential divides and misunderstandings between us. I started with my neighborhood and town, then moved out into the counties around us, then traveled further out into the country. My goal: to connect.

Sebastian Matthews is the author of a memoir, In My Father's Footsteps, and two books of poetry, We Generous and Miracle Day. His hybrid collection of poetry and prose, Beginner's Guide to a Head-on Collision, won the Independent Publisher Book Awards' silver medal. Matthews is also the author of The Life & Times of American Crow, a "collage novel in eleven chapbooks." His work has appeared in or on, among other places, the Atlantic, Blackbird, the Common, Georgia Review, Poetry Daily, Poets & Writers, the Sun, Virginia Quarterly Review, and the Writer's Almanac. Matthews lives in Asheville, North Carolina. Learn more at sebastianmatthews.com.

Daniel Wallace is author of six novels, including Big Fish (1998), Ray in Reverse (2000), The Watermelon King (2003), Mr. Sebastian and the Negro Magician (2007), The Kings and Queens of Roam (2013), and most recently Extraordinary Adventures (May 2017). He is the J. Ross MacDonald Distinguished Professor of English at the University of North Carolina at Chapel Hill, his alma mater, where he directs the Creative Writing Program.

Beyond Repair: Living in a Fractured State (Paperback)