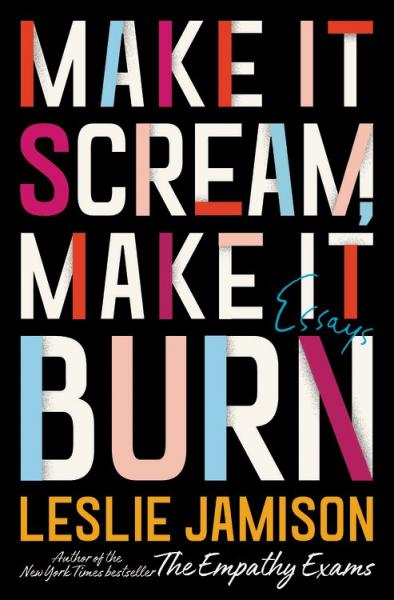 From the “astounding” (Entertainment Weekly), “spectacularly evocative” (The Atlantic), and “brilliant” (Los Angeles Times) author of the New York Times bestsellers The Recovering and The Empathy Exams comes a return to the essay form in this expansive new book.

With the virtuosic synthesis of memoir, criticism, and journalism for which she has become known, Leslie Jamison offers us fourteen new essays that are by turns ecstatic, searching, staggering, and wise. In its kaleidoscopic sweep, Make It Scream, Make It Burn creates a profound exploration of the oceanic depths of longing and the reverberations of obsession.

Among Jamison’s subjects are 52 Blue, deemed “the loneliest whale in the world”; the eerie past-life memories of children; the devoted citizens of an online world called Second Life; the haunted landscape of the Sri Lankan Civil War; and an entire museum dedicated to the relics of broken relationships. Jamison follows these examinations to more personal reckonings — with elusive men and ruptured romances, with marriage and maternity — in essays about eloping in Las Vegas, becoming a stepmother, and giving birth.

Often compared to Joan Didion and Susan Sontag, and widely considered one of the defining voices of her generation, Jamison interrogates her own life with the same nuance and rigor she brings to her subjects. Indeed, this refusal to hide — this emotional and intellectual frankness — is precisely the quality that makes her questing and irrepressible voice impossible to resist.

Leslie Jamison is the author of the New York Times bestsellers The Recovering and The Empathy Exams, and the novel The Gin Closet. She is a contributing writer for the New York Times Magazine, and her work has appeared in publications including The Atlantic, Harper’s, the New York Times Book Review, the Oxford American, and the Virginia Quarterly Review. She directs the graduate nonfiction program at Columbia University and lives in Brooklyn with her family.

Belle Boggs is the author of The Art of Waiting and Mattaponi Queen. Her stories and essays have appeared in Orion, Harper’s, the Paris Review, Ecotone, Slate, and many other publications. She teaches in the MFA program at North Carolina State University. (photo credit: Barbara Tyroler)