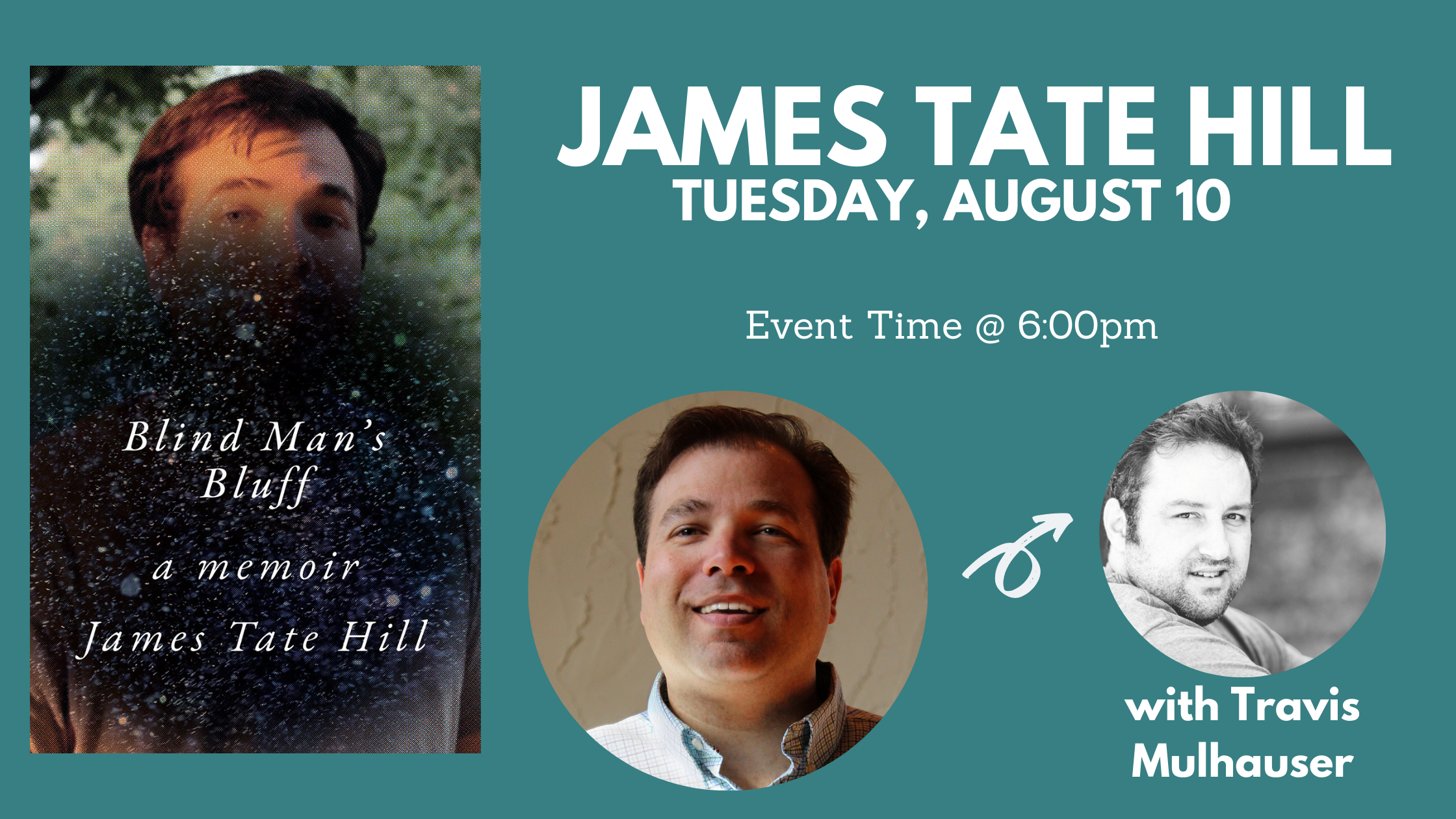 Tuesday, August 10, 2021 - 6:00pm (Click here to register via Crowdcast)
Scroll to the bottom of this webpage to purchase your copies of Blind Man's Bluff and Sweetgirl.

A writer’s humorous and often-heartbreaking tale of losing his sight—and how he hid it from the world.

At age sixteen, James Tate Hill was diagnosed with Leber’s hereditary optic neuropathy, a condition that left him legally blind. When high-school friends stopped calling and a disability counselor advised him to aim for C’s in his classes, he tried to escape the stigma by pretending he could still see.

In this unfailingly candid yet humorous memoir, Hill discloses the tricks he employed to pass for sighted, from displaying shelves of paperbacks he read on tape to arriving early on first dates so women would have to find him. He risked his life every time he crossed a street, doing his best to listen for approaching cars. A good memory and pop culture obsessions like Tom Cruise, Prince, and all things 1980s allowed him to steer conversations toward common experiences.

For fifteen years, Hill hid his blindness from friends, colleagues, and lovers, even convincing himself that if he stared long enough, his blurry peripheral vision would bring the world into focus. At thirty, faced with a stalled writing career, a crumbling marriage, and a growing fear of leaving his apartment, he began to wonder if there was a better way.

James Tate Hill is an editor for Monkeybicycle and contributing editor at Literary Hub, where he writes a monthly audiobooks column. The Best American Essays has chosen two of his works as "Notable," and he won the Nilsen Literary Prize for a First Novel for Academy Gothic. Born in West Virginia, he lives in Greensboro, North Carolina

Travis Mulhauser was born and raised in Northern Michigan. His novel, Sweetgirl, (Ecco/Harper Collins) was long-listed for The Center for Fiction’s First Novel Prize, was a Michigan Notable Book Award winner in 2017, an Indie Next Pick, and named one of Ploughshares Best Books of the New Year. Sweetgirl has also been published in France, Germany, Brazil, The Netherlands, and the UK. Travis is the author of Greetings from Cutler County: A Novella and Stories, and received his MFA in Fiction from UNC-Greensboro.  He is also a proud graduate of North Central Michigan College and Central Michigan University. He lives currently in Durham, North Carolina with his wife and two children.