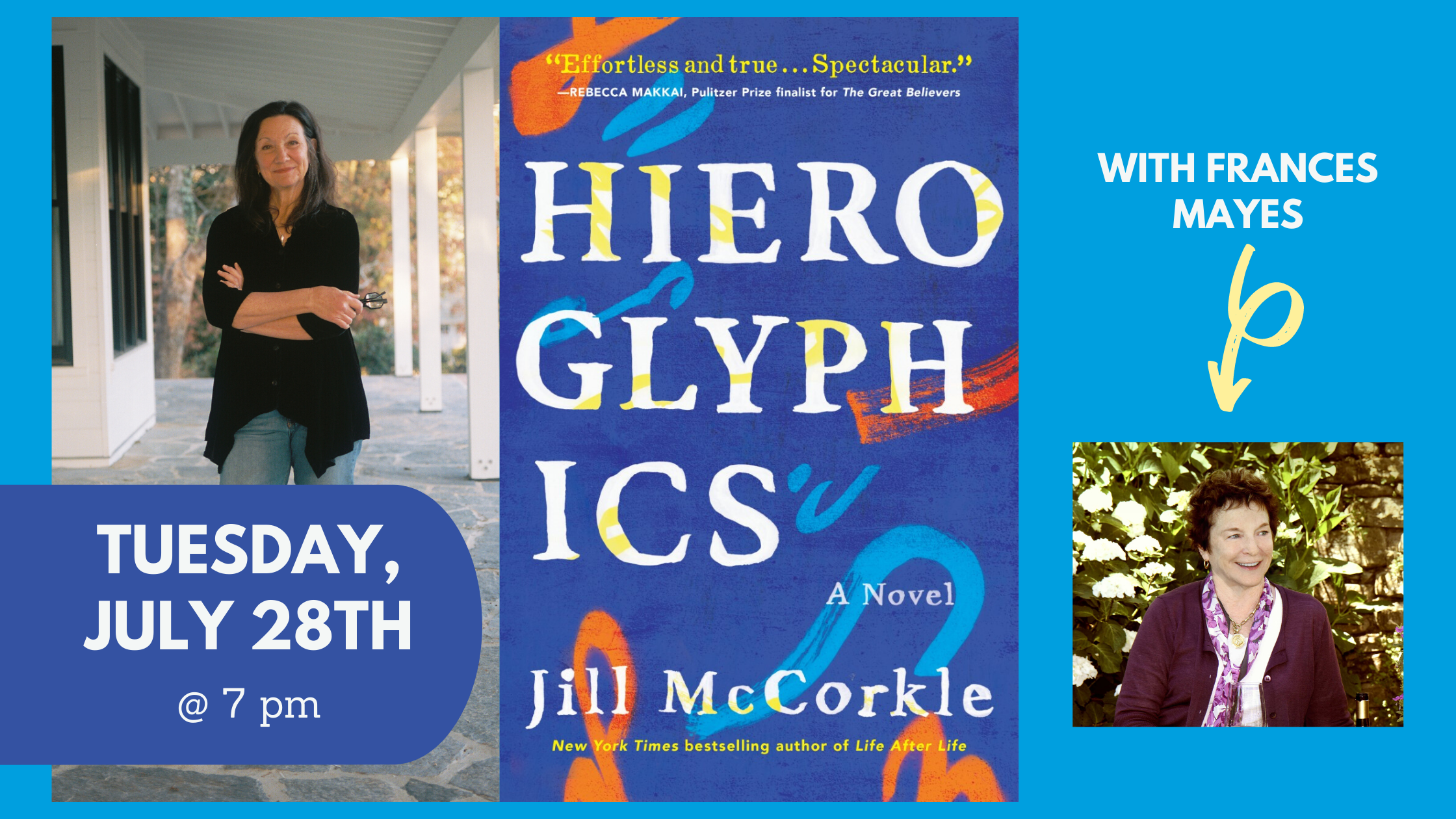 All ordered copies of Hieroglyphics will be signed by the author. Find links to buy Jill McCorkle and Frances Mayes's books at the bottom of this webpage.

"Jill McCorkle has long been one of our wryest, warmest, wisest storytellers. In Hieroglyphics, she takes us on through decades, through loss, through redemption, and lands in revelation and grace. As always with McCorkle, the story feels so effortless and true that we might well miss what a high-wire act she's performing. But make no mistake: She's up there without a net, she never misses a step, and it's spectacular." -Rebecca Makkai, Pulitzer Prize finalist for The Great Believers

Lil and Frank married young, launched into courtship when they bonded over how they both—suddenly, tragically—lost a parent when they were children. Over time, their marriage grew and strengthened, with each still wishing for so much more understanding of the parents they'd lost prematurely.

Now, after many years in Boston, they have retired in North Carolina. There, Lil, determined to leave a history for their children, sifts through letters and notes and diary entries—perhaps revealing more secrets than Frank wants their children to know. Meanwhile, Frank has become obsessed with what might have been left behind at the house he lived in as a boy on the outskirts of town, where a young single mother, Shelley, is just trying to raise her son with some sense of normalcy. Frank's repeated visits to Shelley's house begin to trigger memories of her own family, memories that she'd rather forget. Because, after all, not all parents are ones you wish to remember.

Hieroglyphics reveals the difficulty of ever really knowing the intentions and dreams and secrets of the people who raised you. In her deeply layered and masterful novel, Jill McCorkle deconstructs and reconstructs what it means to be a father or a mother, and what it means to be a child piecing together the world all around us, a child learning to make sense of the hieroglyphics of history and memory.

Frances Mayes's most recent books are Always Italy, See You in the Piazza: New Places to Discover in Italy, and a novel, Women in Sunlight. Her first Italian memoir, Under the Tuscan Sun, remained on the New York Times bestseller list for two and a half years and was a wide-release film. It was followed by other international best sellers, Bella Tuscany, Every Day in Tuscany, and A Year in the World. With her husband, Edward Mayes, she published The Tuscan Sun Cookbook and two photo texts, In Tuscany and Bringing Tuscany Home. She has written a southern memoir, Under Magnolia; the novel Swan; the textbook The Discovery of Poetry; and six books of poetry. Her books have been translated into 54 languages. She lives in Cortona, Italy, and Hillsborough, North Carolina.

See You in the Piazza: New Places to Discover in Italy (Paperback)

Women in Sunlight: A Novel (Paperback)