Denise Heinze presents The Brief and True Report of Temperance Flowerdew, in conversation with A.J. Mayhew 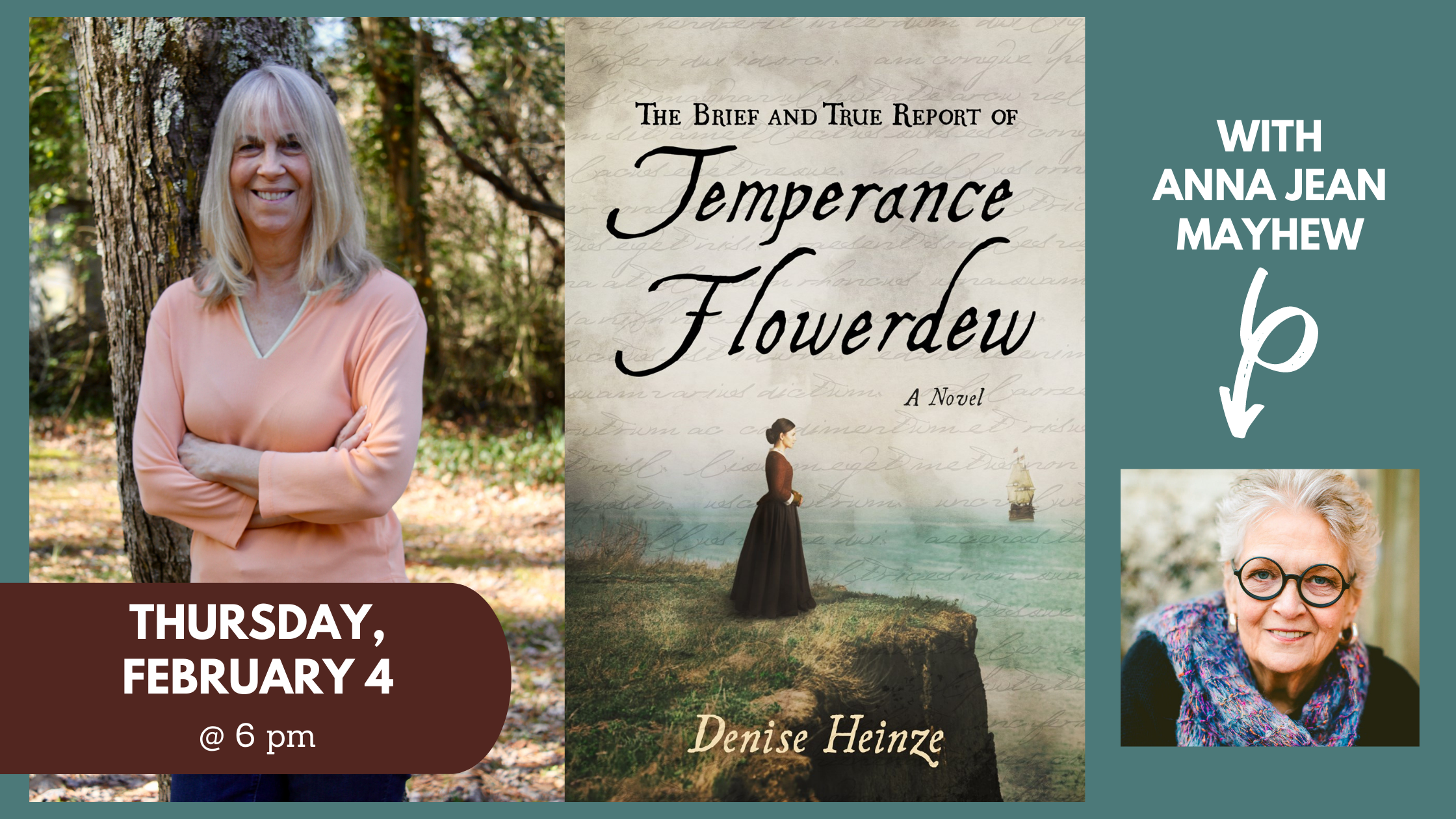 Scroll to the bottom of this webpage to purchase your copy!
The first 10 people to register for the event and buy a copy of Temperance Flowerdew will receive a free copy of Denise Heinze's first book, Sally St. Johns.

Determined to set the historical record straight, and clear her conscience, Temperance Flowerdew—the wife of Virginia's first two governors—puts quill to paper, recounting the hardships that nearly brought the Jamestown colony to its knees, and the extraordinary sacrifice of her servant girl, Lily.

When she stepped aboard the Falcon in 1609, Temperance Flowerdew was not only setting sail from England to the distant shores of America, she was embarking upon a future of opportunity. She didn't yet know how she would make her mark, but in this new place she could do or be whatever she wanted.

Willing as she is to brave this new world, Temperance is utterly ill-equipped to survive the wilderness; all she knows is how to live inside the pages of adventure and philosophy books. Loyally at her side, Lily helps Temperance weather pioneer life. A young woman running from lifelong accusations of witchcraft, Lily finds friendship with Temperance and an acceptance of her psychic gifts. Together, they forge paths within the community: Temperance attempts to advise the makeshift government, while Lily experiences the blossoming of first love.

But as the harsh winter approaches, Lily intuitively senses a darkness creep over the colony and the veneer of civilized life threatens to fall away—negotiations with the Indians grow increasingly hostile and provisions become scarce. Lily struggles to keep food on the table by foraging in the woods and being resourceful. Famine could mean the end of days. It's up to Lily to save them both, but what sacrifice will be enough to survive?

A transporting and evocative story, The Brief and True Report of Temperance Flowerdew is a fiercely hopeful novel—a portrait of two intrepid women who choose to live out their dreams of a future more free than the past.

Denise Heinze, a former literature professor and a PhD graduate of Duke University, writes fiction, nonfiction, and poetry. She is the author of a scholarly work on Toni Morrison, and the eco-thriller Sally St. Johns. A descendant of Louisa May Alcott, she lives in North Carolina.

Anna Jean (A.J.) Mayhew’s first novel, The Dry Grass of August, won the Sir Walter Raleigh Award for Fiction, was a finalist for the book award from the Southern Independent Booksellers Alliance, and has been translated into seven languages. She was a writer in residence at Moulin à Nef Studio Center in Auvillar, France, where she began her second novel, Tomorrow's Bread (Kensington Books, March 2019). In the spring of 2019, A.J. was selected for the TRIO program, a traveling exhibit of art, music, and literature that celebrates the inspirational power of great storytelling. A mother and grandmother, A.J. lives with her Swiss-born husband and two cats in Hillsborough, NC. She's currently working on short stories and perhaps a third novel.

The Brief and True Report of Temperance Flowerdew (Hardcover)

The Dry Grass of August (Paperback)