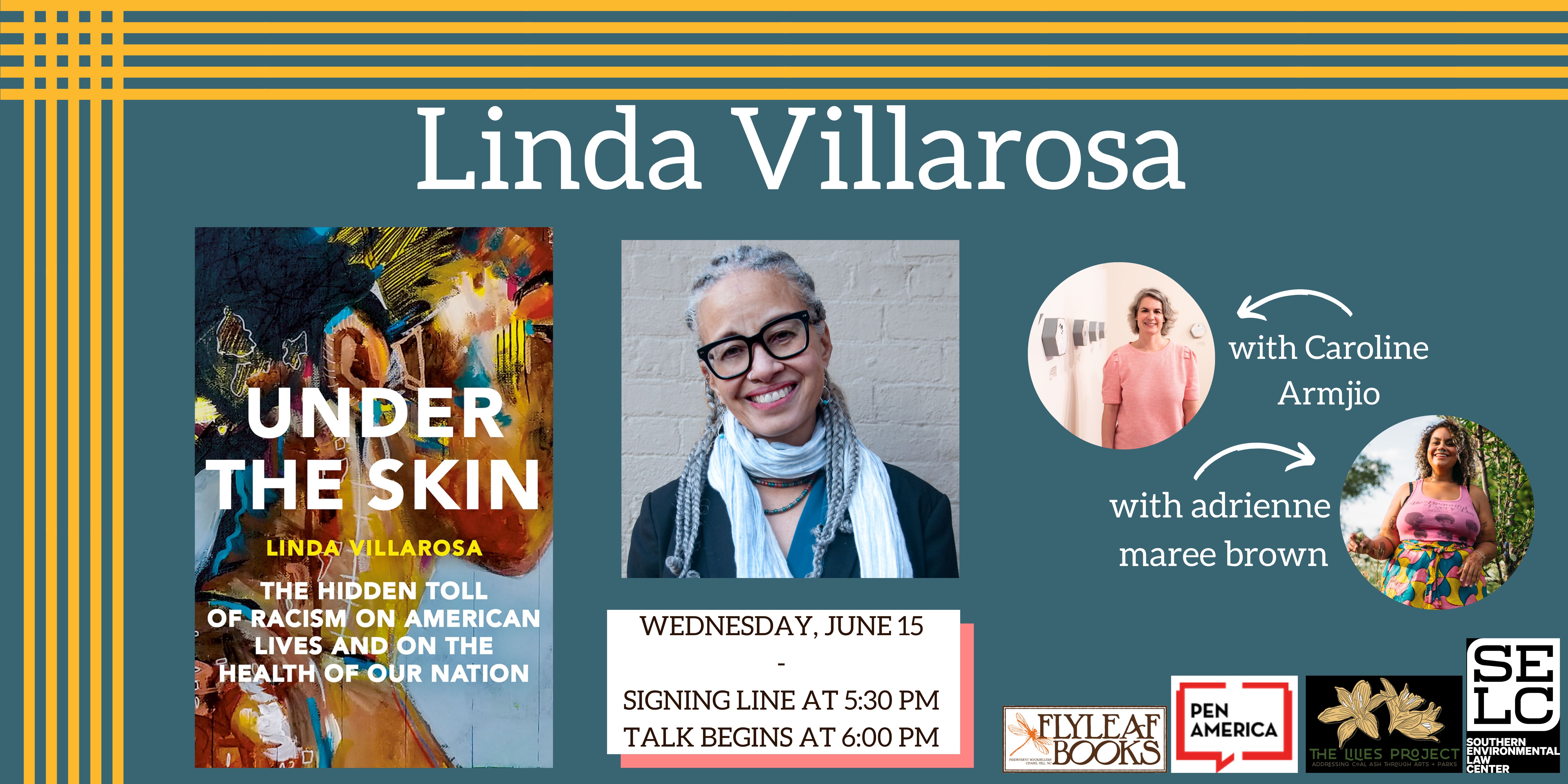 Flyleaf will offer seating for up to 75 in-person guests, with priority access given to folks who purchase the book. Masks recommended.

This event is presented in partnership with The Lilies Project, the Southern Environmental Law Center, Appalachian Voices, and PEN America.

From an award-winning writer at the New York Times Magazine and a contributor to The 1619 Project comes a landmark book that tells the full story of racial health disparities in America, revealing the toll racism takes on individuals and the health of our nation.

In 2018, Linda Villarosa's New York Times Magazine article on maternal and infant mortality among black mothers and babies in America caused an awakening. Hundreds of studies had previously established a link between racial discrimination and the health of Black Americans, with little progress toward solutions. But Villarosa's article exposing that a Black woman with a college education is as likely to die or nearly die in childbirth as a white woman with an eighth grade education made racial disparities in health care impossible to ignore.

Now, in Under the Skin, Linda Villarosa lays bare the forces in the American health-care system and in American society that cause Black people to “live sicker and die quicker” compared to their white counterparts. Today's medical texts and instruments still carry fallacious slavery-era assumptions that Black bodies are fundamentally different from white bodies. Study after study of medical settings show worse treatment and outcomes for Black patients. Black people live in dirtier, more polluted communities due to environmental racism and neglect from all levels of government. And, most powerfully, Villarosa describes the new understanding that coping with the daily scourge of racism ages Black people prematurely. Anchored by unforgettable human stories and offering incontrovertible proof, Under the Skin is dramatic, tragic, and necessary reading.

Linda Villarosa is a journalism professor at the City University of New York and a contributing writer at the New York Times Magazine, where she covers the intersection of race and health. She has also served as executive editor at Essence and as a science editor at The New York Times. Her article on maternal and infant mortality was a finalist for a National Magazine Award. She is a contributor to The 1619 Project.

adrienne maree brown is the writer-in-residence at the Emergent Strategy Ideation Institute, and author of Grievers (the first novella in a trilogy on the Black Dawn imprint), Holding Change: The Way of Emergent Strategy Facilitation and Mediation, We Will Not Cancel Us and Other Dreams of Transformative Justice, Pleasure Activism: The Politics of Feeling Good, Emergent Strategy: Shaping Change, Changing Worlds and the co-editor of Octavia’s Brood: Science Fiction from Social Justice Movements and How to Get Stupid White Men Out of Office. She is the cohost of the How to Survive the End of the World, Octavia’s Parables, and Emergent Strategy podcasts.

Caroline Rutledge Armijo is an environmental advocate, artist and mother living in Greensboro, North Carolina. Caroline is a founding member of Alliance of Carolinians Together (ACT) Against Coal Ash, a state-wide group that advocated for the nation’s largest clean up of 80 million tons of coal ash in North Carolina. Caroline is the Founder and Director of The Lilies Project, a creative placemaking grant that worked with NC A&T State University to make art out of coal ash. She enjoys building community by incorporating story-telling, history and arts into advocacy. Caroline believes that creative placemaking provides opportunities to restore environmental justice at the local level.

Under the Skin: The Hidden Toll of Racism on American Lives and on the Health of Our Nation (Hardcover)

We Will Not Cancel Us: And Other Dreams of Transformative Justice (Paperback)