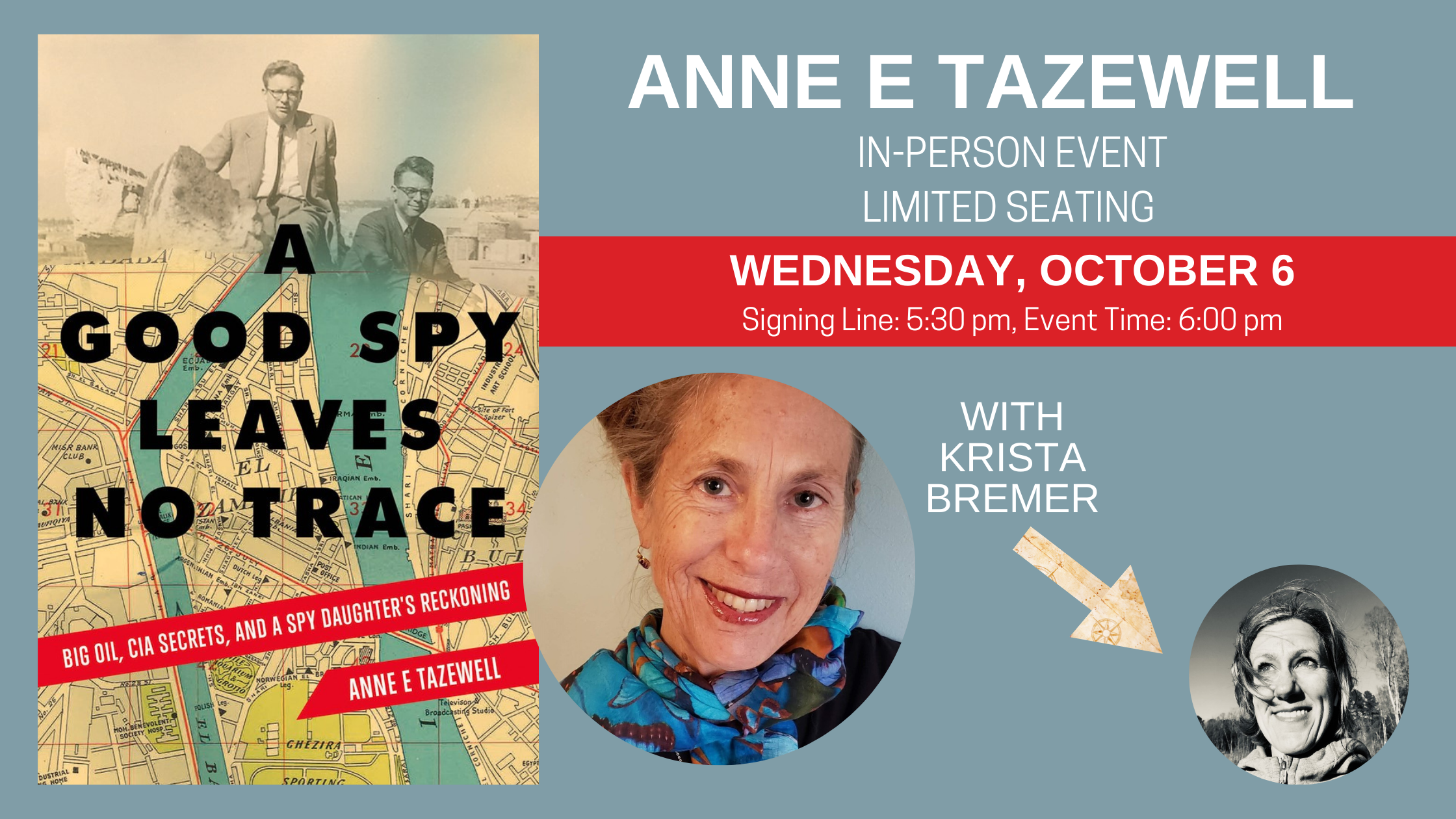 Wednesday, October 6, 2021 - Signing Line at 5:30 pm, Talk begins at 6:00pm
Scroll to the bottom of this webpage to purchase your copy of A Good Spy Leaves No Trace.

This will be an in-person event, with a video recording posted after the event. Flyleaf will offer seating for up to twenty-five in-person guests, with priority access given to folks who purchase the book. If you preorder a copy through Flyleaf, please use your order comments to indicate whether you would like 1 or 2 seats held for you at the in-person event. We will contact you to confirm the reservation prior to the event.

Her father was a man cloaked in mystery, a man of contradiction. James M. Eichelberger was a writer, philosopher, decorated WWII intelligence officer, CIA Agent, and oil industry consultant who died a penniless alcoholic. After he left her family in Beirut, Lebanon when she was six years old, Anne E. Tazewell only saw her father seven times before his death in 1989.

A back-packing nature-loving world traveler, Anne discovered her professional passion after parenting three children and going to college in her mid-forties. Her calling to reduce the use of oil to mitigate the worst of what is to come with climate change is what brought her father back into her life decades after his death. A chance radio interview began a quest to understand his life and in turn better understand her own.

A Good Spy Leaves No Trace is part ghost story, part secret political history, part call to action and part family memoir. It is an investigation of loss, love, oil, and the alternatives, a story both personal and political. At its heart, A Good Spy is a multigenerational account about family. It is about using the alchemical power of family and acceptance to heal.

Anne E Tazewell is an award-winning advocate for the environment and adventure lover. A married mother of three, Anne has imported handicrafts from South America and Southeast Asia, opened a vegetarian restaurant in Virginia, been a textile artist in Key West, Florida and for the past twenty plus years- seventeen at NC State University- has served as a clean energy expert. She has an MFA in Creative Non-Fiction from Goucher College and lives in Carrboro, North Carolina. A Good Spy Leaves No Trace is her first book.

Krista Bremer is the author of A Tender Struggle. Her creative nonfiction has won several awards including a Pushcart Prize, a North Carolina Arts Council Fellowship, and a Rona Jaffe Foundation award. Her essays have been published in The New York Times Magazine, O: The Oprah Magazine, The London Times, and elsewhere. She has also been featured on NPR and in the PBS series Arab American Stories.

A Tender Struggle: Story of a Marriage (Paperback)