Sage Rountree & Alexandra DeSiato: Teaching Yoga Beyond the Poses: A Practical Workbook for Integrating Themes, Ideas, and Inspiration into Your Class

Join us at Flyleaf for a talk with the Sage Rountree, owner of the local Carolina Yoga Company, and Alexandra DeSiato, writer, yoga instructor, and coauthor of Lifelong Yoga! An event for both yoga teachers and students alike. 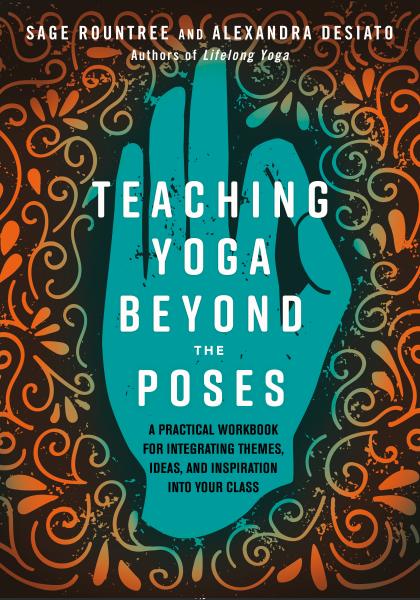 New yoga teachers are often taught the poses but not themes or phrases that will make students come back and seasoned instructors often want a fresh approach or new theme to explore. Experienced yoga instructors Sage Rountree and Alexandra DeSiato give yoga teachers tools to find a genuine voice and tap into innate wisdom; offer ready-made, detailed themes to use in classes or home practice; and provide guidance and useful, flexible templates for building a toolkit of authentic themes for future use.

The workbook begins with a section on voice, authenticity, emulation, phrasing, practice, repetition, and finding inspiration. While offering guidance for new or experienced teachers so that they feel confident speaking from a place of authority and offering their students memorable themes, the authors explore what it means to be authentic and how teachers can approach authenticity without feeling overly exposed or turning their yoga classes into a therapy session. The second section of the book contains 54 complete themes in template form, so instructors can easily use them in a class. These themes are broken down in chapters such as: yoga philosophy, seasonal themes, meditations, quotes, and spiritual ideas and stories from other traditions that translate well to yoga. Each theme is explored in a way that allows teachers to add their own voice, take, and spin. The final section of the book includes gentle advice and prompts with 54 blank templates, so instructors can create their own themes. With a unique angle and a practical feel, this workbook will appeal to yoga teachers, teacher trainers, and at-home practitioners who are moving to the next level.

SAGE ROUNTREE, PhD, is a teacher trainer at the highest level (E-RYT 500) and director of the yoga teacher trainings at the Carolina Yoga Company, which she co-owns. Rountree is the author of The Athlete’s Guide to Yoga (VeloPress, 2008), The Athlete’s Pocket Guide to Yoga (VeloPress, 2009), The Athlete’s Guide to Recovery (VeloPress, 2011), The Runner’s Guide to Yoga (VeloPress, 2012), Racing Wisely (Sage Tree, 2013), Everyday Yoga (VeloPress, 2015), and, with Alexandra DeSiato, Lifelong Yoga (North Atlantic Books, 2017). Her writing has appeared in and she has been cited in Runner’s World, Yoga Journal, USA Triathlon Magazine, Endurance Magazine, ESPN, The Atlantic, Vogue, Outside, Men’s Fitness, USA Today, U.S. News and World Report, Martha Stewart Living Radio, and the Chicago Tribune. Rountree presents internationally on yoga, meditation, and athletics at venues including the U.S. Olympic Training Center, the Pentagon, Yoga Journal LIVE!, the Kripalu Center for Yoga and Health, 1440 Multiversity, the Wanderlust Festival, the Running Summit, the Road Cycling Summit, and USA Triathlon’s Art and Science of Triathlon conference.

ALEXANDRA DESIATO, MA, holds the highest accreditation of yoga teaching (E-RYT 500) and is the coauthor of Lifelong Yoga (North Atlantic Books, 2017). She is an expert in yoga for healthy aging and yoga for prenatal and postnatal women. DeSiato presents and assists in yoga workshops locally and nationally, including Yogaville and Kripalu. She holds a Master’s in English literature from Appalachian State University, and in addition to teaching yoga classes has taught writing and literature at the college level for over 15 years.

Teaching Yoga Beyond the Poses: A Practical Workbook for Integrating Themes, Ideas, and Inspiration into Your Class (Paperback)

Lifelong Yoga: Maximizing Your Balance, Flexibility, and Core Strength in Your 50s, 60s, and Beyond (Paperback)