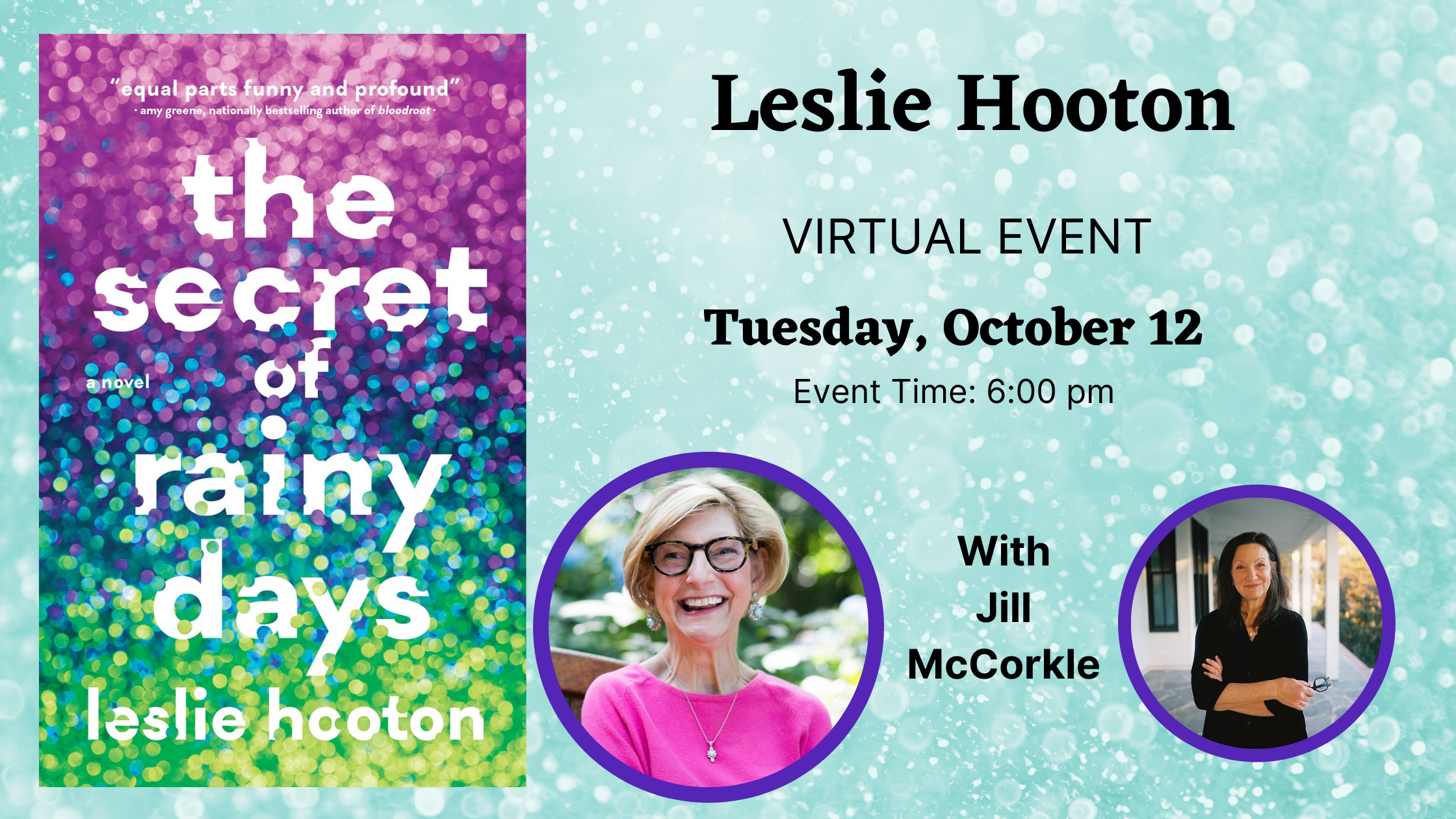 Tuesday, October 12, 2021 - Talk begins at 6:00 pm (click here to register via Crowdcast)
Scroll to the bottom of this webpage to purchase your copy of The Secret of Rainy Days.

Nina Barnes Enloe, "Little Bit," grew up in the shadow of her imposing grandmother and her best friend Win—who did, in fact, win at everything. Bit thought she had escaped her grandmother's grip by starting over in New York City, but an unexpected death takes her back to the colorful town and people of Erob, Alabama. Bit's world turns upside down as she faces who she was and learns who she is becoming.

Growing up in Erob, Alabama, Nina "Little Bit" Barnes Enloe lived in the shadow of her imposing and harsh grandmother, Nina "Biggie" Barnes Enloe. If she wasn't being bossed around by Biggie, then the task fell to her best friend Win...who did win. At everything. Bit never seemed to share Win's lifetime supply of “lucky dust.” Perhaps the only thing Bit has ever chosen for herself is her friendship with Avery, the out-of-towner who showed up on the saddest day of her life—unpretentious and decidedly un-Southern—with a funeral casserole in hand.

Bit believes she can escape her grandmother’s controlling grip once and for all by moving somewhere where she is the only Nina Enloe listed: New York. Yet her world is turned upside down when an unexpected loss forces her to leave her new life in the city and return to Erob, where she must face everything—and everyone—she left behind. In the process, Bit discovers her true identity, learns the hard lessons of acceptance and forgiveness, finds herself falling in love in unexpected places, and finds comfort in the secrets of rainy days.

Leslie Hooton, author of Before Anyone Else, brings her signature wit and Southern charm to the page again in this triumphant coming-of-age story.

Leslie Hooton is many things: a fabulous friend, a powerful speaker, a flower enthusiast, and a lover of language. You don't want to miss her beloved novels, Before Anyone Else and The Secret of Rainy Days. Leslie attended the Sewanee Writer's Conference, and studied with Alice McDermott, Jill McCorkle, and Richard Bausch. Growing up in a small Alabama town, Leslie went on to earn her B.A. and M.A. from Auburn University and J.D. from Samford University. She became intrigued by people and discovered everyone has their own unique stories. Leslie resides and writes in Charlotte, North Carolina.

The Secret of Rainy Days (Paperback)

Before Anyone Else (Paperback)