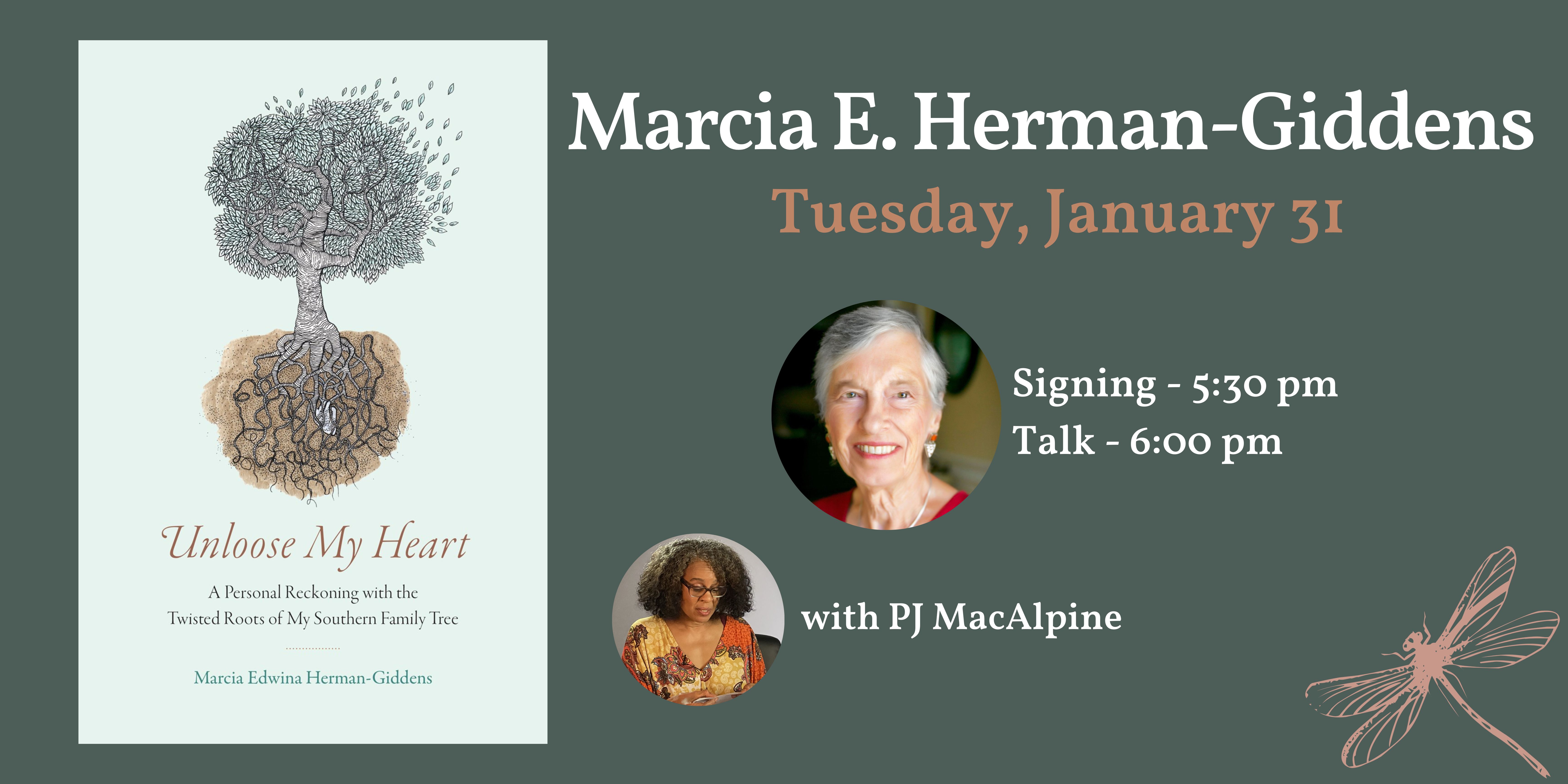 Flyleaf will offer seating for up to 60 in-person guests, with priority access given to folks who purchase the book. Masks recommended.

A deeply personal memoir that unearths a family history of racism, slaveholding, and trauma as well as love and sparks of delight.

Marcia Herman’s family moved to Birmingham in 1946, when she was five years old, and settled in the steel-making city dense with smog and a rigid apartheid system. Marcia, a shy only child, struggled to fit in and understand this world, shadowed as it was by her mother’s proud antebellum heritage. In 1966, weary of Alabama’s toxic culture, Marcia and her young family left Birmingham and built a life in North Carolina. Later in life, Herman-Giddens resumed a search to find out what she did not know about her family history. Unloose My Heart interweaves the story of her youth and coming of age in Birmingham during the Civil Rights Movement together with this quest to understand exactly who and what her maternal ancestors were and her obligations as a white woman within a broader sense of American family.

More than a memoir set against the backdrop of Jim Crow and the civil rights struggle, this is the work of a woman of conscience writing in the twenty-first century. Haunted by the past, Unloose My Heart is a journey of exploration and discovery, full of angst, sorrow, and yearning. Unearthing her forebears’ centuries-long embrace of plantation slavery, Herman-Giddens dug deeply to parse the arrogance and cruelty necessary to be a slaveholder and the trauma and fear that ripple out in its wake. All this forced her to scrutinize the impact of this legacy in her life, as well as her debt to the enslaved people who suffered and were exploited at her ancestors’ hands. But she also discovers lost connections, new cousins and friends, unexpected joys, and, eventually, a measure of peace in the process. With heartbreak, moments of grace, and an enduring sense of love, Unloose My Heart shines a light in the darkness and provides a model for a heartfelt reckoning with American history.

Herman-Giddens will be in conversation with her African-American linked cousin, PJ MacAlpine. Their connection began over 230 years ago through the enslavement of MacAlpine's ancestors. They will be discussing this connection and its ramifications at the event.

Marcia E. Herman-Giddens was born in Washington, DC, her family moved to Birmingham, Alabama in 1947. As Marcia grew up, she was profoundly affected by her exposure to the wrongs of Jim Crow, the ongoing atrocities, and pervasive injustice. Later, as a young mother, she and her then-husband participated in Birmingham’s Civil Rights Movement. She is one of the last of her generation who as a child and young adult lived through the racial horrors in Birmingham. Dr. Herman-Giddens attended St John's College in Annapolis, Duke University, and the University of North Carolina, receiving her DrPH there in 1994. She spent her career years in North Carolina, in the areas of medicine, public health, research, scientific writing, and advocacy, primarily involving children. Her scientific papers have been published in numerous medical journals and books. This debut memoir is her first full length book.

PJ MacAlpine is a veteran of the U.S. Marine Corps and the U.S. Army.  A writer, musician and performer, her work explores the role of the historical past on present day lived experiences and its effects on society

Unloose My Heart: A Personal Reckoning with the Twisted Roots of My Southern Family Tree (Hardcover)