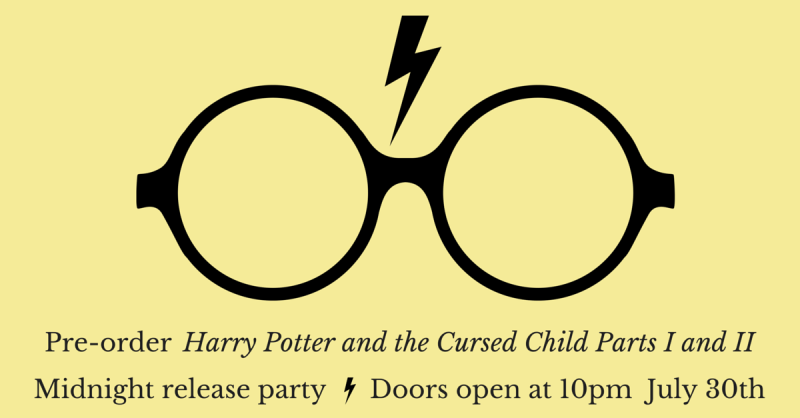 UPDATE: We've reached our limit for pre-ordered copies!  You may still place a new order through Flyleaf but we cannot guarantee you'll receive your copy on the release date.

Join us starting at 10pm on July 30th for snacks and magical activities before Harry Potter and The Cursed Child Parts I & II is officially released at 12:01am on July 31st!

Doors will open at 10pm, though you do not have to attend the entire party to receive your pre-order.  But be sure to arrive before we lock the doors at 12:293/4 to pick up your book on time!

Festivities will include: special crafts and decorations, a birthday cake for Harry, plenty of butterbeer, and a Costume Contest at 11pm for those in their best Wizard finery and house colors.

Based on an original new story by J.K. Rowling, Jack Thorne and John Tiffany, a new play by Jack Thorne, "Harry Potter and the Cursed Child" is the eighth story in the Harry Potter series and the first official Harry Potter story to be presented on stage. The play will receive its world premiere in London's West End on July 30, 2016.

It was always difficult being Harry Potter and it isn't much easier now that he is an overworked employee of the Ministry of Magic, a husband and father of three school-age children.
While Harry grapples with a past that refuses to stay where it belongs, his youngest son Albus must struggle with the weight of a family legacy he never wanted. As past and present fuse ominously, both father and son learn the uncomfortable truth: sometimes, darkness comes from unexpected places.