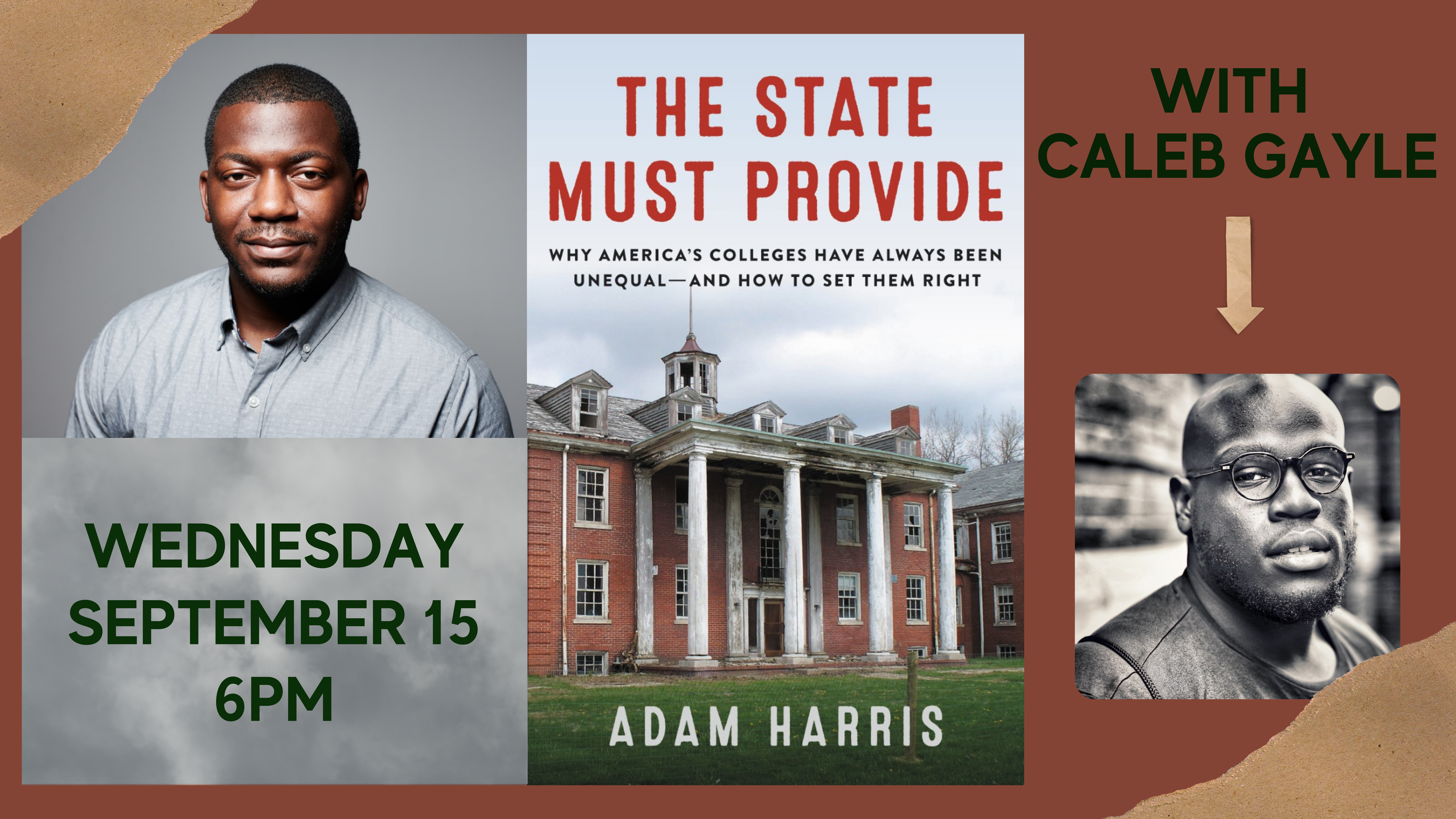 Wednesday, September 15, 2021 - 6:00 pm (Click here to register via Crowdcast!)
Scroll to the bottom of this webpage to purchase your copy!

The definitive history of the pervasiveness of racial inequality in American higher education.

America’s colleges and universities have a shameful secret: they have never given Black people a fair chance to succeed. From its inception, our higher education system was not built on equality or accessibility, but on educating—and prioritizing—white students. Black students have always been an afterthought. While governments and private donors funnel money into majority white schools, historically Black colleges and universities (HBCUs), and other institutions that have high enrollments of Black students, are struggling to survive, with state legislatures siphoning away federal funds that are legally owed to these schools. In The State Must Provide, Adam Harris reckons with the history of a higher education system that has systematically excluded Black people from its benefits.

Harris weaves through the legal, social, and political obstacles erected to block equitable education in the United States, studying the Black Americans who fought their way to an education, pivotal Supreme Court cases like Plessy v. Ferguson and Brown v. Board of Education, and the government’s role in creating and upholding a segregated education system. He explores the role that Civil War–era legislation intended to bring agricultural education to the masses had in creating the HBCUs that have played such a major part in educating Black students when other state and private institutions refused to accept them.

The State Must Provide is the definitive chronicle of higher education’s failed attempts at equality and the long road still in front of us to remedy centuries of racial discrimination—and poses a daring solution to help solve the underfunding of HBCUs. Told through a vivid cast of characters, The State Must Provide examines what happened before and after schools were supposedly integrated in the twentieth century, and why higher education remains broken to this day.

Adam Harris is a staff writer at The Atlantic where he has covered education and national politics since 2018. He was previously a reporter at the Chronicle of Higher Education where he covered federal education policy and historically black colleges and universities. He is a 2021 New America Fellow and the recipient of the Rising Star Award by the News Media Alliance.

Caleb Gayle, a recipient of a New America Fellowship, Matthew Power Literary Reporting Award, and the PEN America Writing for Justice Fellowship, serves as CEO of the National Conference on Citizenship. His writing has been featured in The New York Times Magazine, The Guardian, The Atlantic, Threepenny Review, and more. Gayle is an author of a forthcoming book from Riverhead Books that examines the true story of the Black people who were once considered citizens of the Creek Nation.

The State Must Provide: Why America's Colleges Have Always Been Unequal--and How to Set Them Right (Hardcover)