IN-PERSON: Sally Greene and Paul Jones present THE EDWARD TALES and SOMETHING WONDERFUL 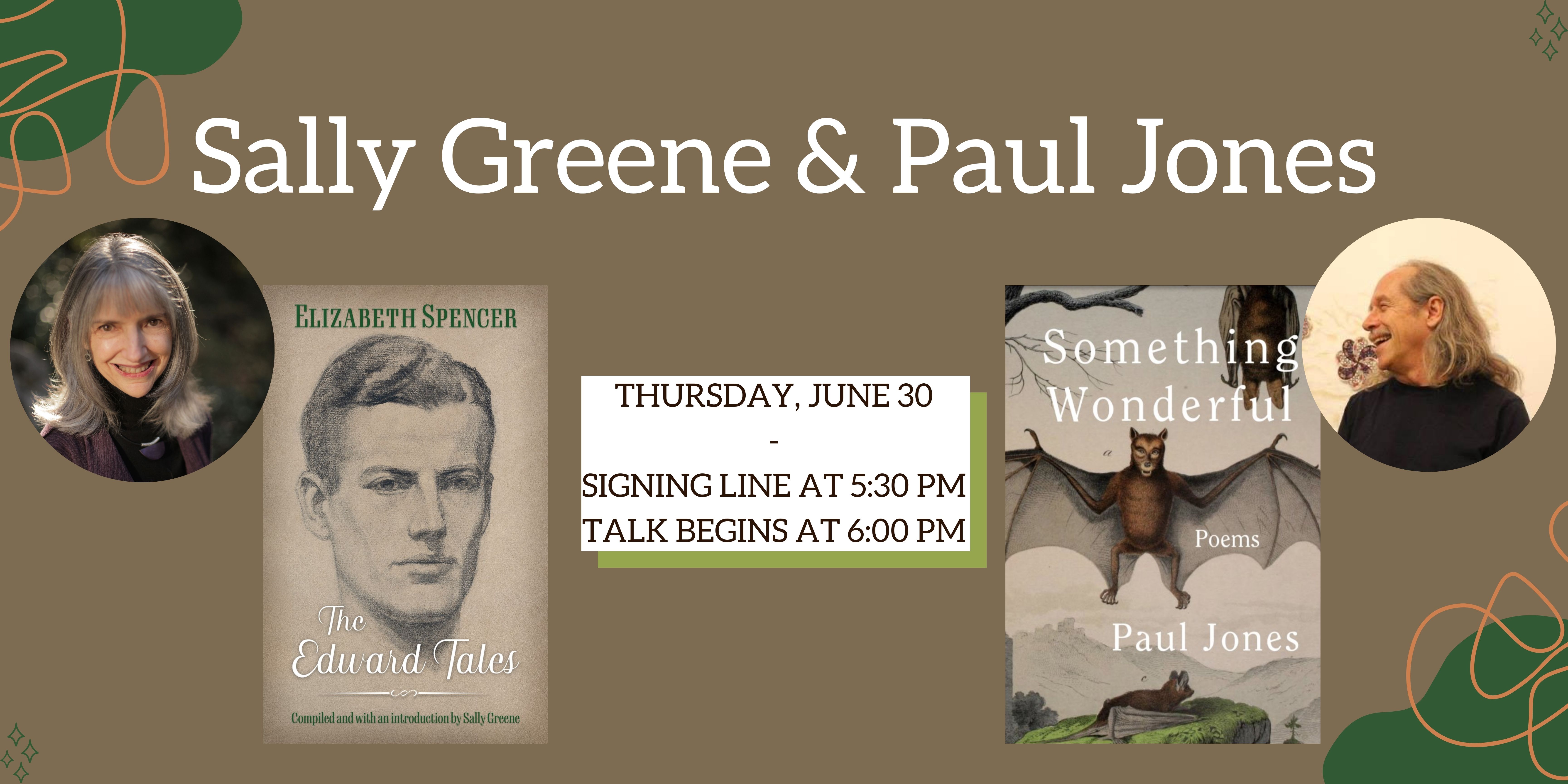 Join us for an evening celebrating the literary legacy of Elizabeth Spencer through the appreciative lens of Sally Greene, along with a poetry reading by Paul Jones from his latest work, Something Wonderful.

The Edward Tales is a focused character study on the most fascinating, mercurial figure who appeared several times in Spencer’s work, Edward Glenn. Sally Greene brings together the four narratives in which Edward figures: the play For Lease or Sale (1989) and three short stories, “The Runaways” (1994), “Master of Shongalo” (1996), and “Return Trip” (2009). The collection allows readers to observe Spencer’s evolving style while offering glimpses of the moral reasoning that lies at the heart of all her work. Greene’s critical introduction helpfully places these narratives within the context of Spencer’s entire body of writing. The Edward Tales confirms Spencer’s place as one of our most beloved and accomplished writers.

Paul Jones’ latest collection of poetry, Something Wonderful, in the words of Jaki Shelton Green, ‘embodies a vast, intimate terrain. These poems listen back through lenses of nature, variations of joy, sorrow, mischief, surrender, death, and a few constellations of mystery in between. Paul Jones perches the reader in limbs that were empty choir lofts. From this vantagepoint of his lyrical universe we experience the space between dreams, new worlds created by old words spoken, odes to tubers, donuts, and the magical everydayness of where poetry lives and is sustained. Something Wonderful offers poetics that are accessible, language that stirs memory, and imagery that overflows cups meant to constrain. This new collection by Paul Jones makes us swoon to a song about “a world where nothing that is cut bleeds.”’

Sally Greene is an independent scholar who specializes in the literature of twentieth-century British and American women. She is editor of Virginia Woolf: Reading the Renaissance (Ohio University Press, 1999), and her essays have appeared in Twentieth-Century Literature, Southern Quarterly, Mississippi Quarterly, Southern Cultures, and American Scholar, and elsewhere. Also a public historian, her work on nineteenth-century North Carolina legal history is recognized by her membership in the Historical Society of North Carolina. She has served in elected office in Orange County for almost two decades; her work as a county commissioner to negotiate terms of the distribution of North Carolina's share of the proceeds from a landmark national opioid litigation resulted in her receipt of a Commissioner of the Year award from the North Carolina Association of County Commissioners.

Paul Jones' manuscript of poems crashed into the moon, carried by Israel’s Beresheet Lander in 2019. In November 2021, Redhawk Publishing released his book, Something Wonderful. Also in November 2021, Jones was inducted into the NC State Computer Science Hall of Fame. Jones retired as Professor Emeritus after 40+ years at UNC on June 30, 2020. While his 1990 chapbook, What the Welsh and Chinese Have In Common, is difficult to find, many of his poems are available thanks to various journals with on-line presences. Among those journals are Poetry, Hudson Review (forthcoming),Sheila-Na-Gig, Red Fez, Broadkill Review, and 2River View. His poems are also found in anthologies including Best American Erotic Poems.