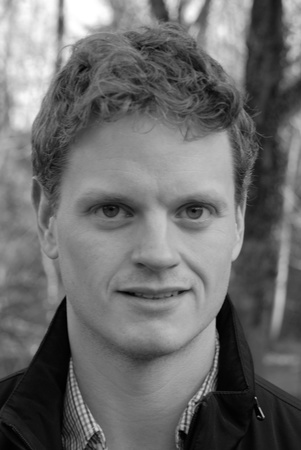 When Ben, a suburban family man, takes a business trip to rural Pennsylvania, he decides to spend the afternoon before his dinner meeting on a short hike. Once he sets out into the woods behind his hotel, he quickly comes to realize that the path he has chosen cannot be given up easily. With no choice but to move forward, Ben finds himself falling deeper and deeper into a world of man-eating giants, bizarre demons, and colossal insects.

Dreams and flashbacks from his past dominate his thoughts, showing him the most powerful and terrifying moments of his life, as real as when he first lived them. On a quest of epic, life-or-death proportions, Ben finds help comes in some of the most unexpected forms, including a profane crustacean and a variety of magical objects, tools, and potions. Desperate to return to his family, Ben is determined to track down the “Producer,” the creator of the world in which he is being held hostage and the only one who can free him from the path.

At once bitingly funny and emotionally absorbing, Magary’s novel is a remarkably unique addition to the contemporary fantasy genre, one that draws as easily from the world of classic fairy tales as it does from video games. In The Hike, Magary takes readers on a daring odyssey away from our day-to-day grind and transports them into an enthralling world propelled by heart, imagination and survival.

Drew Magary is a correspondent for GQ and a columnist for Deadspin. He is the author of the memoir Someone Could Get Hurt and the novel The Postmortal. His writing has appeared in Maxim, New York, NPR, NBC, The Atlantic, Bon Appétit, The Huffington Post, the Awl, Gawker, Penthouse, Playboy, Yahoo!, ESPN, Rolling Stone, Comedy Central, and more. He’s been featured on Good Morning America and has been interviewed by the AV Club, the New York Observer, USA Today, US News, and many others. He lives in Maryland with his wife and three kids.
Event date:
Tuesday, August 2, 2016 - 7:00pm
Event address:
752 Martin Luther King Jr. Blvd.
Chapel Hill, NC 27514