At a time when global change has eradicated thousands of unique cultures, The Last Whalers tells the stunning inside story of the Lamalerans, an ancient tribe of 1,500 hunter-gatherers who live on a volcanic island so remote it is known by other Indonesians as "The Land Left Behind." They have survived for centuries by taking whales with bamboo harpoons, but now are being pushed toward collapse by the encroachment of the modern world.

Award-winning journalist Doug Bock Clark, who lived with the Lamalerans across three years, weaves together their stories with novelistic flair to usher us inside this hidden drama. Jon, an orphaned apprentice whaler, strives to earn his harpoon and feed his ailing grandparents. Ika, Jon's indomitable younger sister, struggles to forge a modern life in a tradition-bound culture and realize a star-crossed love. Ignatius, a legendary harpooner entering retirement, labors to hand down the Ways of the Ancestors to his son, Ben, who would rather become a DJ in the distant tourist mecca of Bali.
With brilliant, breathtaking prose and empathetic, fast-paced storytelling, Clark details how the fragile dreams of one of the world's dwindling indigenous peoples are colliding with the irresistible upheavals of our rapidly transforming world, and delivers to us a group of families we will never forget. 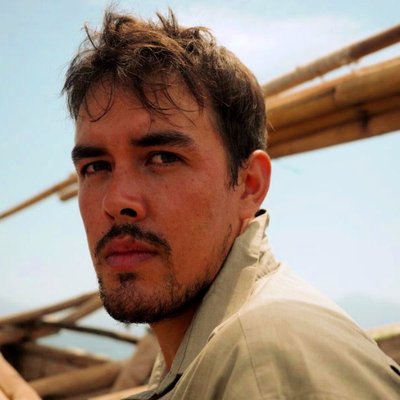 Doug Bock Clark is a writer whose articles have appeared or are forthcoming in the New York Times Magazine, The Atlantic, National Geographic, GQ, Wired, Rolling Stone, The New Republic, and elsewhere. He won the 2017 Reporting Award, was a finalist for the 2016 Mirror Award, and has been awarded two Fulbright Fellowships, a grant from the Pulitzer Center on Crisis Reporting, and an 11th Hour Food and Farming Fellowship. Clark has been interviewed about his work on CNN, BBC, NPR, and ABC's 20/20. He is a Visiting Scholar at New York University's Arthur L. Carter Journalism Institute.

"Doug Bock Clark has delivered us an amazing account of an almost mythological fight--man versus leviathan--and in vivid prose he reveals the most profound truths about both how strong we are and how fragile we are. Part journalism, part anthropology, The Last Whalers is a spectacular and deeply empathetic attempt to understand a vanishing world. I absolutely loved this magnificent book."
—Sebastian Junger, #1 New York Times bestselling author of Tribe and The Perfect Storm
"The Last Whalers is a monumental achievement. With luminous writing and expert reporting, Doug Bock Clark provides a rare view into our shared human past, from exhilarating whale hunts to intimate family dramas. In doing so, he reveals the complex lives of men and women whose ancient culture teeters between the eternal teachings of the Ancestors and the pressures and enticements of modernity."
—Mitchell Zuckoff, #1 New York Times bestselling author of 13 Hours and Lost in Shangri-La
"The Last Whalers is an intimate and moving account of cultural extinction told on a profoundly human scale, an urgent and affecting plea for understanding and preserving our myriad identities and traditions before they become forever lost on the relentless road toward a monocultural world."
—Francisco Cantú, author of the New York Times bestseller and #1 Indie Next pick The Line Becomes a River
"The Last Whalers is an extraordinary feat of reportage and illumination. It introduces a remote community and an endangered way of life, but it refuses to pander to familiar tropes of the exotic, instead bringing its subjects to the page in all their glorious complexity--in all their longing, triumphs, frustrations, and joys. Its gaze is global and intimate at once, tirelessly attuned to the tidal forces and subtle eddies of what it means to be alive."
—Leslie Jamison, New York Times bestselling author of The Recovering and The Empathy Exams
Event date:
Thursday, January 31, 2019 - 7:00pm
Event address:
752 Martin Luther King Jr. Blvd.
Chapel Hill, NC 27514

The Last Whalers: Three Years in the Far Pacific with a Courageous Tribe and a Vanishing Way of Life (Hardcover)