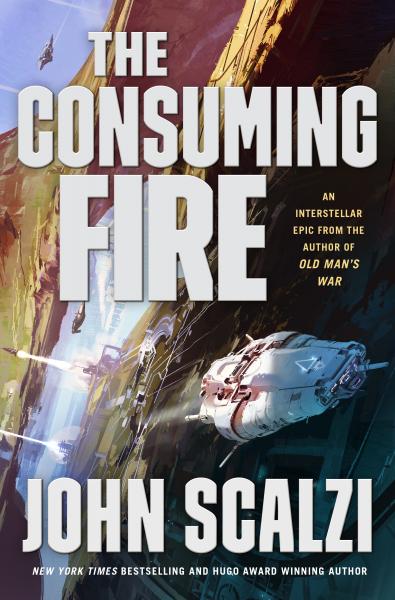 Heralded as one of the most popular science fiction writers today, New York Times bestselling author John Scalzi returns with the second installment in his acclaimed epic space-opera Interdependency series, The Consuming Fire.

Following The Collapsing Empire (2017), the next installment in this much-lauded series continues to cement Scalzi’s prominent place in the literary world.

The Interdependency, humanity’s interstellar empire, is on the verge of collapse. The Flow, the extra-dimensional conduit that makes travel between the stars possible, is disappearing, leaving the entire star systems stranded. When it goes, human civilization may go with it—unless desperate measures can be taken. Emperox Grayland II, the leader of the Interdependency, is ready to take those measures to help ensure the survival of billions. But nothing is ever that easy. Arrayed before her are those who believe the collapse of the Flow is a myth—or at the very least, an opportunity that can allow them to ascend to power.

While Grayland prepares for disaster, others are preparing for a civil war, a war that will take place in the halls of power, the markets of business and the altars of worship as much as it will take place between spaceships and battlefields. The Emperox and her allies are smart and resourceful, but then so are her enemies. Nothing about this power struggle will be simple or easy… and all of humanity will be caught in its widening gyre.

The Consuming Fire is the eagerly anticipated sequel to The Collapsing Empire, Scalzi’s first publication under his headline-making decade long contract with Tor. The Interdependency series will satisfy fans around the world as a great new entry point to Scalzi’s accessible science fiction, filled to the brim with his trademark wit, humor, and creativity that makes him a favorite of science fiction readers.

JOHN SCALZI is the author of several SF novels including his massively successful bestselling Old Man's War sequence, comprising Old Man's War, The Ghost Brigades, The Last Colony (a New York Times bestseller), Zoe's Tale, The Human Division, and The End of All Things. His other novels include the New York Times bestsellers Lock In, Fuzzy Nation, and Redshirts; the latter novel won science fiction's Hugo Award in 2013. He also won a Hugo Award for Your Hate Mail Will Be Graded, a collection of essays from his popular blog Whatever (whatever.scalzi.com). He lives in Ohio with his wife and daughter.

“As much as Scalzi has the scientific creativity of Michael Crichton, he also has the procedural chops of a Stephen J. Cannell to craft a whodunit with buddy-cop charm and suspects aplenty–most of them in someone else’s body.”­­ —USA Today on Lock In

"If anyone stands at the core of the American science fiction tradition at the moment, it is Scalzi." —The Encyclopedia of Science Fiction, Third Edition

“Plenty of action, great character development, vivid and believable world-building, and a thought-provoking examination of disability culture and politics. . . . Yet more evidence that Scalzi is a master at creating appealing commercial fiction.” —Kirkus Reviews (starred review) on Lock In

Praise for The Consuming Fire

"Scalzi has constructed a thrilling novel so in tune with the flow of politics that it would feel relevant at almost any time." —Entertainment Weekly, Grade B+

"Scalzi mixes science, history, and politics with sharp action and intriguing characters. Readers will be thrilled to take another wild ride across the universe with the author of the “Old Man’s War” series." —Library Journal, starred review

"Fans of Game of Thrones and Dune will enjoy this bawdy, brutal, and brilliant political adventure" —Booklist

"Scalzi continues to be almost insufferably good at his brand of fun but think-y sci-fi adventure." —Kirkus Reviews

The Consuming Fire (The Interdependency #2) (Hardcover)