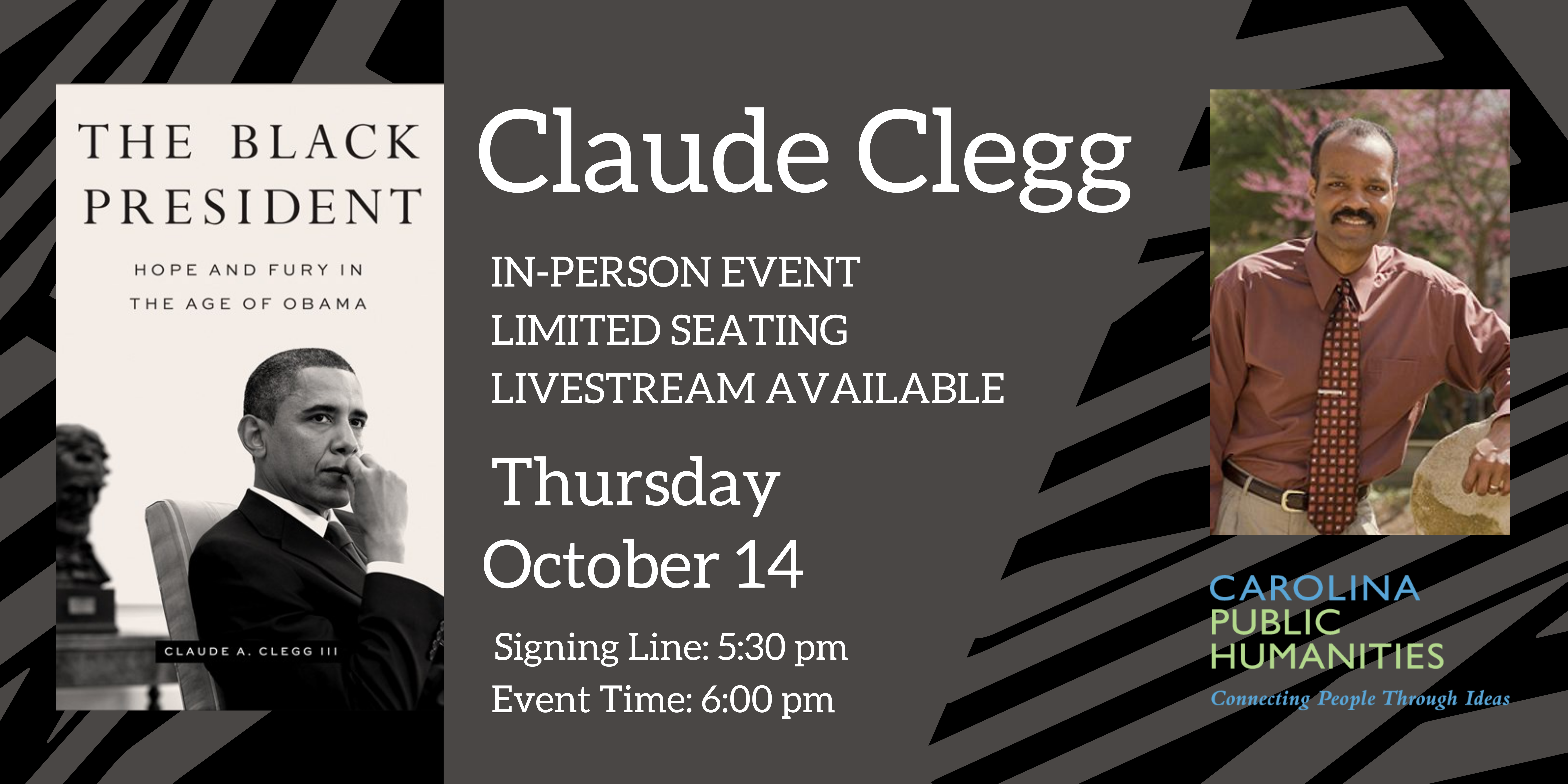 This will be a hybrid event, with a livestream available via Zoom and a video recording posted after the event. Flyleaf will offer seating for up to 25 in-person guests, with priority access given to folks who purchase the book. If you preorder a copy through Flyleaf, please use your order comments to indicate whether you would like one or two seats held for you at the in-person event. We will contact you to confirm the reservation prior to the event.

The first sweeping, legacy-defining history of the entire Obama presidency.

In The Black President, the first interpretative, grand-narrative history of Barack Obama's presidency in its entirety, Claude A. Clegg III situates the former president in his dynamic, inspirational, yet contentious political context. He captures the America that made Obama's White House years possible, while insightfully rendering the America that resolutely resisted the idea of a Black chief executive, thus making conceivable the ascent of the most unlikely of his successors.

In elucidating the Obama moment in American politics and culture, this book is also, at its core, a sweeping exploration of the Obama presidency's historical environment, impact, and meaning for African Americans—the tens of millions of people from every walk of life who collectively were his staunchest group of supporters and who most starkly experienced both the euphoric triumphs and dispiriting shortcomings of his years in office. In Obama's own words, his White House years were "the best of times and worst of times" for Black America. Clegg is vitally concerned with the veracity of this claim, along with how Obama engaged the aspirations, struggles, and disappointments of his most loyal constituency and how representative segments of Black America engaged, experienced, and interpreted his historic presidency.

Clegg draws on an expansive archive of materials, including government records and reports, interviews, speeches, memoirs, and insider accounts, in order to examine Obama's complicated upbringing and early political ambitions, his delicate navigation of matters of race, the nature and impacts of his administration's policies and politics, the inspired but also carefully choreographed symbolism of his presidency (and Michelle Obama's role), and the spectrum of allies and enemies that he made along the way. The successes and the aspirations of the Obama era, Clegg argues, are explicitly connected to our current racist, toxic political discourse. Combining lively prose with a balanced, nonpartisan portrait of Obama's successes and failures, The Black President will be required reading not only for historians, politics junkies, and Obama fans but also for anyone seeking to understand America's contemporary struggles with inequality, prejudice, and fear.

CLAUDE A. CLEGG III is Lyle V. Jones Distinguished Professor of History and African, African American, and Diaspora Studies at UNC Chapel Hill, where his research focuses on the African diaspora of the Atlantic world, exploring the ways in which people of African descent have created and imagined communities and identities outside Africa. He received his BA in Political Science and Afro-American Studies at UNC Chapel Hill and his MA and PhD in History from the University of Michigan at Ann Arbor. Before moving to Chapel Hill in 2015, he taught at Indiana University at Bloomington, where he served as Chair of the Department of History, and at North Carolina A&T State University. His published books include An Original Man: The Life and Times of Elijah Muhammad (St. Martins, 1997), Troubled Ground: A Tale of Murder, Lynching, and Reckoning in the New South (University of Illinois Press, 2010), and The Price of Liberty: African Americans and the Making of Liberia (UNC Press, 2004), which was a 2004 Choice Magazine Outstanding Academic Title and a finalist for the Frederick Douglass Book Prize. Dr. Clegg’s latest book, The Black President: Hope and Fury in the Age of Obama, examines the ways that African Americans imagined, experienced, and interpreted the presidency of Barack Obama and is scheduled for release by Johns Hopkins University Press in October 2021. He has been Associate Editor for the Journal of American History as well as Editor of the “Blacks in the Diaspora” book series by Indiana University Press, and he has appeared on National Public Radio, Black Entertainment Television, and C-SPAN’s “Booknotes.”

The Black President: Hope and Fury in the Age of Obama (Hardcover)