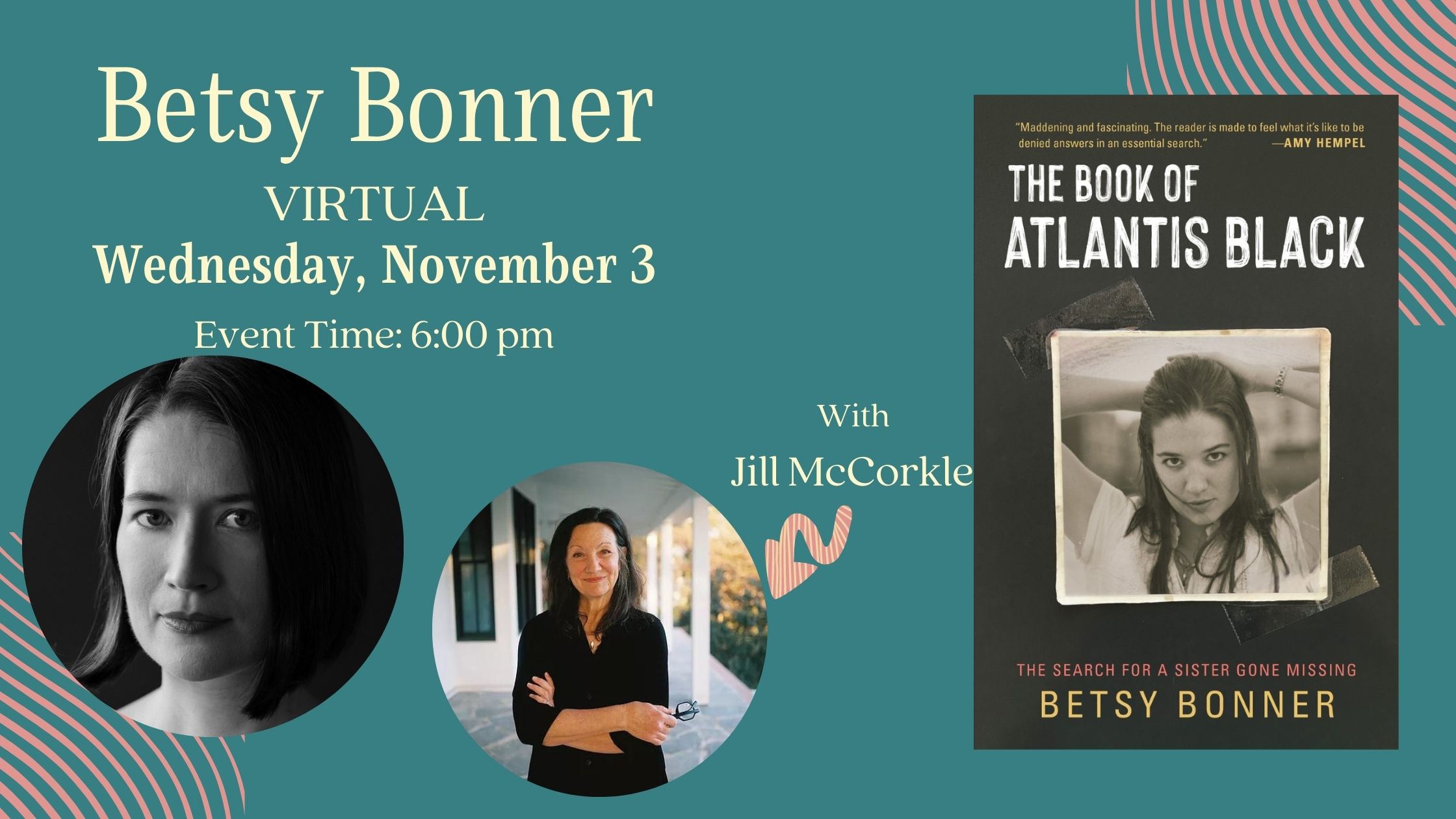 Wednesday, November 3, 2021 - 6:00 pm (click here to register via Crowdcast)
Scroll to the bottom of this webpage to purchase your copy!

"A mixture of biography and true crime, this narrative . . . offers more plot twists, shocking revelations and shady characters than most contemporary thrillers." —NPR

The Book of Atlantis Black will have you questioning facts, rooting for secrets, and asking what it means to know the truth.

A young woman is found dead on the floor of a Tijuana hotel room. An ID in a nearby purse reads “Atlantis Black.” The police report states that the body does not seem to match the identification, yet the body is quickly cremated and the case is considered closed.

So begins Betsy Bonner’s search for her sister, Atlantis, and the unraveling of the mysterious final months before Atlantis’s disappearance, alleged overdose, and death. With access to her sister’s email and social media accounts, Bonner attempts to decipher and construct a narrative: frantic and unintelligible Facebook posts, alarming images of a woman with a handgun, Craigslist companionship ads, DEA agent testimony, video surveillance, police reports, and various phone calls and moments in the flesh conjured from memory. Through a history only she and Atlantis shared—a childhood fraught with abuse and mental illness, Atlantis’s precocious yet short rise in the music world, and through it all an unshakable bond of sisterhood—Bonner finds questions that lead only to more questions and possible clues that seem to point in no particular direction. In this haunting memoir and piercing true crime account, Bonner must decide how far she will go to understand a sister who, like the mythical island she renamed herself for, might prove impossible to find.

Betsy Bonner is the author of Round Lake, a poetry collection published by Four Way Books. She is a faculty member of the Writer's Foundry M.F.A. program at St. Joseph's College in Brooklyn, New York and the former Director of the 92Y Unterberg Poetry Center, where she teaches an annual poetry seminar. Her work has appeared in The New Republic, The Paris Review, Parnassus, Poetry Daily, The Brooklyn Quarterly and The Southampton Review. She holds an MFA in creative writing from Columbia University and a BA from Sarah Lawrence College. She is a fellow of the MacDowell Colony, Eliot House and the VCCA, and a mentor in PEN's Prison Writing Program.

Jill McCorkle’s first two novels were released simultaneously when she was just out of college, and the New York Times called her “a born novelist.” Since then, she has published five other novels and four collections of short stories, and her work has appeared in Best American Short Stories several times, as well as The Norton Anthology of Short Fiction. Five of her books have been New York Times Notable books, and her novel, Life After Life, was a New York Times bestseller.
Event date:
Wednesday, November 3, 2021 - 6:00pm
Event address:
752 Martin Luther King Jr. Blvd.
Chapel Hill, NC 27514

The Book of Atlantis Black: The Search for a Sister Gone Missing (Paperback)