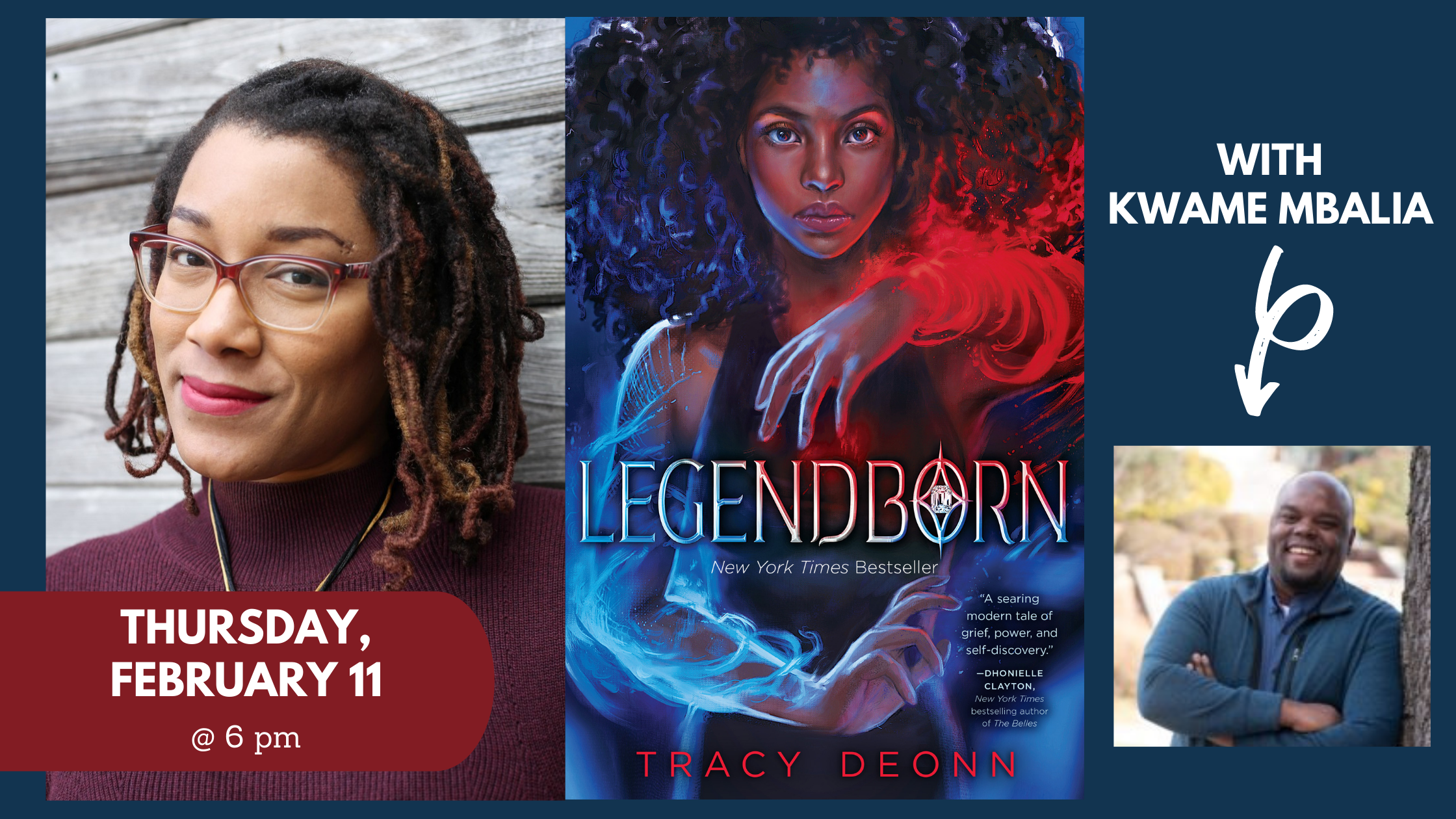 *Hosted in partnership with the Chapel Hill Public Library*

Scroll to the bottom of this webpage to purchase the featured books! Click here for a comprehensive TBR companion to the event.

Filled with mystery and an intriguingly rich magic system, Tracy Deonn’s YA contemporary fantasy Legendborn offers the dark allure of City of Bones with a modern-day twist on a classic legend and a lot of Southern Black Girl Magic.

After her mother dies in an accident, sixteen-year-old Bree Matthews wants nothing to do with her family memories or childhood home. A residential program for bright high schoolers at UNC–Chapel Hill seems like the perfect escape—until Bree witnesses a magical attack her very first night on campus.

A flying demon feeding on human energies.
A secret society of so-called “Legendborn” students that hunt the creatures down.
And a mysterious teenage mage who calls himself a “Merlin” and who attempts—and fails—to wipe Bree’s memory of everything she saw.

The mage’s failure unlocks Bree’s own unique magic and a buried memory with a hidden connection: the night her mother died, another Merlin was at the hospital. Now that Bree knows there’s more to her mother’s death than what’s on the police report, she’ll do whatever it takes to find out the truth, even if that means infiltrating the Legendborn as one of their initiates.

She recruits Nick, a self-exiled Legendborn with his own grudge against the group, and their reluctant partnership pulls them deeper into the society’s secrets—and closer to each other. But when the Legendborn reveal themselves as the descendants of King Arthur’s knights and explain that a magical war is coming, Bree has to decide how far she’ll go for the truth and whether she should use her magic to take the society down—or join the fight.

Tracy Deonn is a writer and second-generation fangirl. She grew up in central North Carolina, where she devoured fantasy books and Southern food in equal measure. After earning her master's degree in communication and performance studies from the University of North Carolina at Chapel Hill, Tracy worked in live theater, video game production, and K–12 education. When she’s not writing, Tracy speaks on panels at science fiction and fantasy conventions, reads fanfic, arranges puppy playdates, and keeps an eye out for ginger-flavored everything. She can be found on Twitter at @TracyDeonn and at TracyDeonn.com.

in conversation with:
Kwame Mbalia is the New York Times best-selling author of Tristan Strong Punches a Hole in the Sky, for which he received a Coretta Scott King Author Honor award. The book was also named to best-of-the-year lists compiled by Publishers Weekly, the Chicago Public Library, and the New York Times. The second book in the trilogy is Tristan Strong Destroys the World. Kwame lives with his wife and children in Raleigh, North Carolina, where he is currently working on the third book about Tristan. Follow him on Twitter @KSekouM.

From a Certain Point of View (Star Wars) (Paperback)