Mark Davis presents A WARREN COURT OF OUR OWN 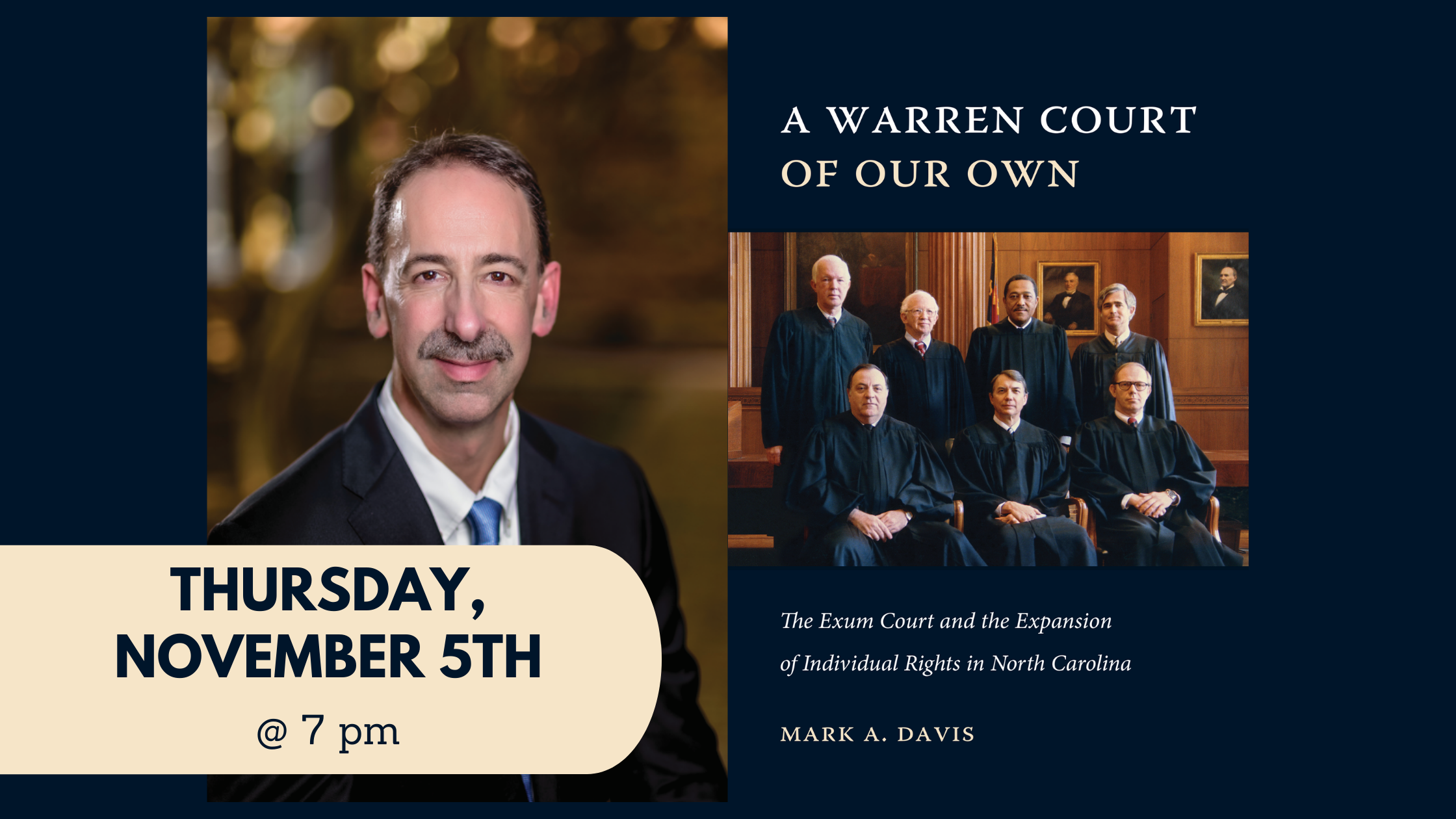 In November of 1986, the North Carolina Supreme Court was at a crossroads. After virtually a century of dominance by the Democratic Party, Rhoda Billings, a Republican, had been appointed chief justice by Governor Jim Martin several months earlier. Martin had also appointed two Republican associate justices to join her on the court. These appointments resulted in a fierce battle over the next two months to determine whether the Republican Party could finally break the electoral stranglehold held by the Democrats and obtain control of the state’s highest court in the 1986 elections. Although five of the supreme court’s seven seats were on the ballot that November, the focus of the attention was on the race for chief justice between Billings and the Democratic candidate, Jim Exum, who had served on the court for the previous twelve years. After being passed over by Governor Martin in favor of Billings despite North Carolina’s longstanding gubernatorial tradition of appointing the senior associate justice to fill a vacancy for the position of chief justice, Exum resigned from the court to run against Billings.

Ultimately, the Democrats swept all five supreme court races on the ballot, ushering in Exum’s tenure as the head of the court. Over the next eight years, Exum presided over a supreme court that—despite the existence of stark differences between several of the justices with regard to judicial philosophy—issued numerous landmark decisions expanding the rights of criminal defendants, breathing new life into the declaration of liberties set out in the North Carolina Constitution, and significantly increasing the remedies available to individual plaintiffs in the areas of tort, employment, and workers’ compensation law.

While the expansion of individual rights by the United States Supreme Court under Chief Justice Earl Warren has been the subject of extensive academic commentary, very little has been written about the Exum Court. The dearth of scholarship on this subject is unfortunate because Exum’s tenure as chief justice—like Warren’s—constituted an unprecedented era of judicial boldness.

This book is based primarily on a detailed review of the Exum Court’s body of cases and over 45 interviews with the surviving justices from that era of the court, law clerks, practitioners, and members of North Carolina’s legal academy. In addition, it draws upon contemporaneous interviews of the justices conducted between 1986 and 1995 as well as on the few existing books and articles about the members of the Exum Court and North Carolina’s transformation into a two-party state in judicial elections.

A Warren Court of Our Own: The Exum Court and the Expansion of Individual Rights in North Carolina explores in depth the pathbreaking nature of the Exum Court’s jurisprudence and the justices themselves in the hope of providing a better understanding of this unique and important period in the history of North Carolina’s highest court and how it fundamentally changed North Carolina law.

Mark Davis currently serves as an Associate Justice on the Supreme Court of North Carolina and has been an appellate judge since 2013. Prior to that, he served as General Counsel to the Governor of North Carolina. He also spent seventeen years as an attorney in both the private and public sectors. In 2012, he was awarded The Order of the Long Leaf Pine. Justice Davis is the author of A Warren Court of Our Own: The Exum Court and the Expansion of Individual Rights in North Carolina. He and his wife Marcia live in Raleigh with their three children. Find Mark on Facebook and Twitter @judgemarkdavis.