Naima Coster presents WHAT'S MINE AND YOURS, in conversation with Christina Baker Kline 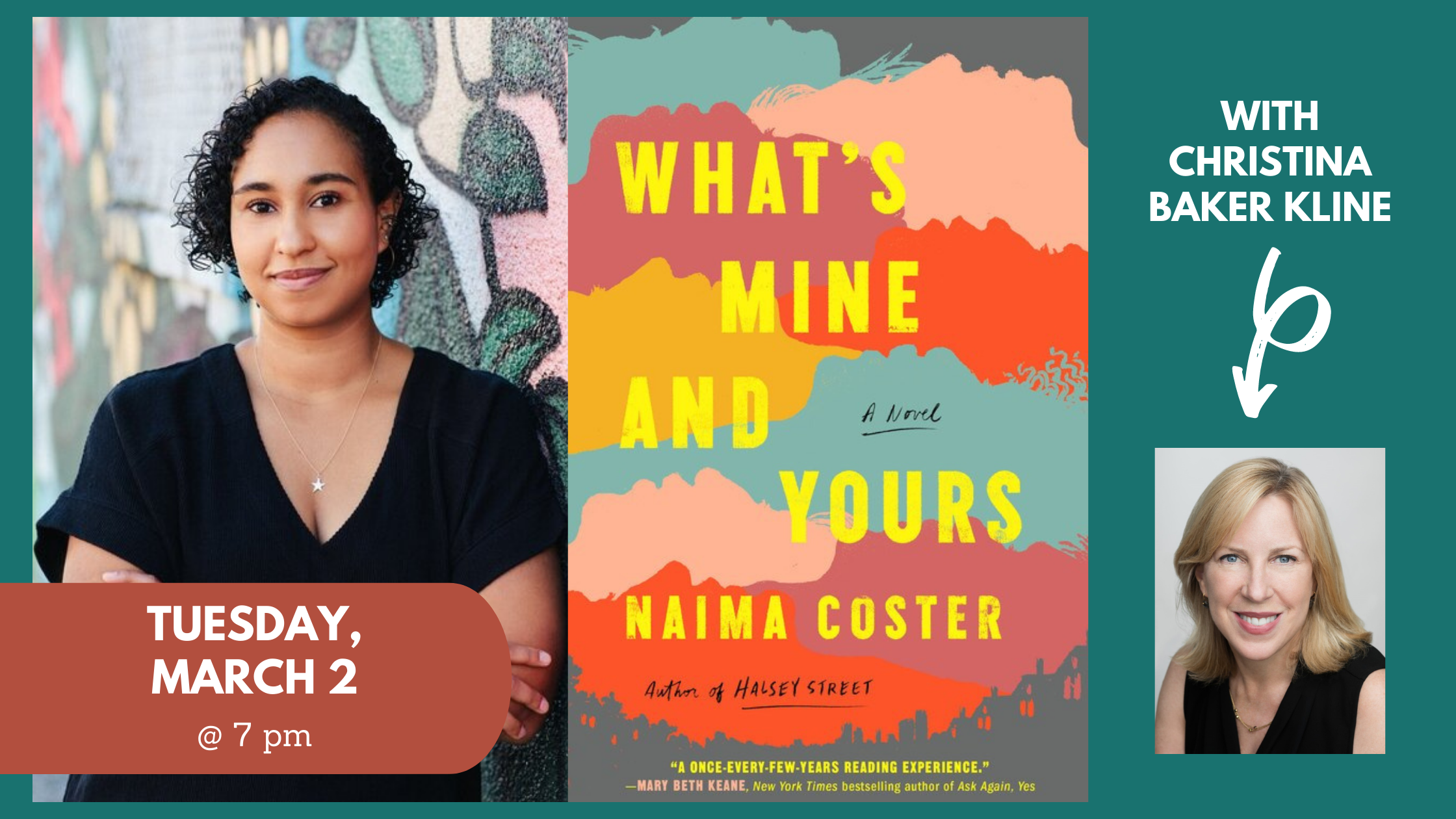 Scroll to the bottom of this webpage to purchase the featured title.

A community in the Piedmont of North Carolina rises in outrage as a county initiative draws students from the largely Black east side of town into predominantly white high schools on the west. For two students, Gee and Noelle, the integration sets off a chain of events that will tie their two families together in unexpected ways over the span of the next twenty years.

On one side of the integration debate is Jade, Gee's steely, ambitious mother. In the aftermath of a harrowing loss, she is determined to give her son the tools he'll need to survive in America as a sensitive, anxious, young Black man. On the other side is Noelle's headstrong mother, Lacey May, a white woman who refuses to see her half-Latina daughters as anything but white. She strives to protect them as she couldn't protect herself from the influence of their charming but unreliable father, Robbie.

When Gee and Noelle join the school play meant to bridge the divide between new and old students, their paths collide, and their two seemingly disconnected families begin to form deeply knotted, messy ties that will shape the trajectory of their adult lives. And their mothers—each determined to see her child inherit a better life—will make choices that will haunt them for decades to come.

As love is built and lost, and the past never too far behind, What's Mine and Yours is an expansive, vibrant tapestry that moves between the years, from the foothills of North Carolina, to Atlanta, Los Angeles, and Paris. It explores the unique organism that is every family: what breaks them apart and how they come back together.

Naima Coster is the author of Halsey Street, and a finalist for the 2018 Kirkus Prize for Fiction. Naima's stories and essays have appeared in the New York Times, Kweli, the Paris Review Daily, Catapult, the Rumpus, and elsewhere. She holds an MFA in Creative Writing from Columbia University, as well as degrees from Fordham University and Yale. She has taught writing for over a decade, in community settings, youth programs, and universities. She lives in Brooklyn with her family.

in conversation with Christina Baker Kline:

A #1 New York Times bestselling author of eight novels, including The Exiles, Orphan Train, and A Piece of the World, Christina Baker Kline is published in 40 countries. Her novels have received the New England Prize for Fiction, the Maine Literary Award, and a Barnes & Noble Discover Award, among other prizes, and have been chosen by hundreds of communities, universities and schools as “One Book, One Read” selections. Her essays, articles, and reviews have appeared in publications such as the New York Times and the NYT Book Review, The Boston Globe, The San Francisco Chronicle, LitHub, Psychology Today, and Slate.

What's Mine and Yours (Hardcover)

The Exiles: A Novel (Hardcover)

A Piece of the World: A Novel (Paperback)