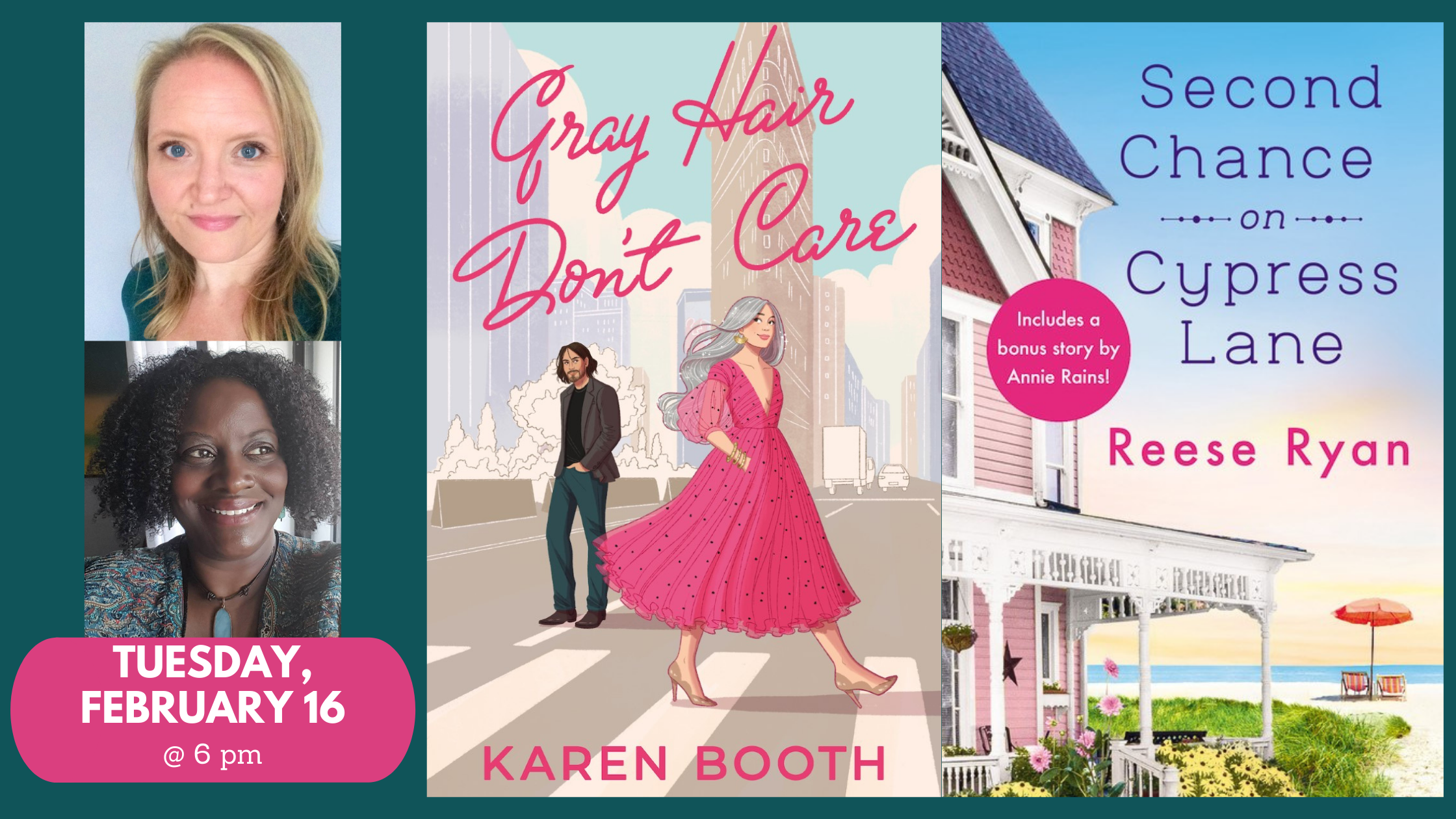 Tuesday, February 16 - 6:00 pm (register via Crowdcast here)
Scroll to the bottom of this webpage to purchase the featured titles. Karen Booth has generously offered to sign and/or personalize copies of her books. Just note in your order comments that you'd like a signed copy, and please specify the name you'd like Karen to personalize your copy for.

At 47, newly divorced makeup artist Lela Bennett is dreading her next steps. Dating. Meeting people. Not letting herself go. But then she runs into Donovan James and tries something different—sleeping with her sexy crush from college. Unfortunately, in a post-orgasm stupor, Lela confesses she was in love with Donovan all those years ago. He responds by leaving while she sleeps. The next morning, her gray hairs are practically taunting her. She knows she has to get it together. Forget men. Embrace her age. Own her gray.

Donovan James is a marketing genius, but his ex-wives will tell you—nothing freaks him out like feelings. Three years after his one-night stand with Lela, he’s focused on his daughter’s lifestyle company, but unprepared to meet the face of their new beauty brand. It’s Lela. With stunning silver locks and new confidence, she’s no longer swayed by his charms. When business starts booming, the universe seems intent on throwing them together time and again. And suddenly, two people convinced that romance was behind them are wondering if love could be what’s next.

Karen Booth is a Midwestern girl transplanted in the South, raised on '80s music and repeated readings of Forever by Judy Blume. A married mom of two college-age kids, she is the author of more than 25 steamy contemporary romances, and has been a finalist for RT Magazine's Series Romance of the Year, RT Magazine's Gold Seal of Excellence, The Booksellers Best Award, and the National Excellence in Romance Fiction Award. Her books have been translated into seventeen languages.

About Second Chance on Cypress Lane:

Rising-star reporter Dakota Jones is usually the one breaking the news—until an inadvertent scandal wrecks her career. The only place she can go to regroup is Holly Grove Island. But her small North Carolina hometown comes with a major catch: Dexter Roberts, the first man to break Dakota’s heart, is her new boss. Working alongside Dexter, who is more attractive than he has a right to be, shows Dakota what might have been . . . but she isn’t giving him another chance to break her heart.

Dexter has always regretted the way things ended between him and Dakota. Her return could be his opportunity to finally make amends. But the more time he spends with Dakota, the more he realizes his feelings for her never went away. Now he has just a few months to convince her to give their love a second chance. But for Dakota to agree to stay, Dexter will have to reveal the devastating truth about why he let Dakota go all those years ago.

Reese Ryan writes red hot romance with captivating family drama, surprising secrets, and a posse of deliciously-flawed characters. Past president of the Heart of Carolina Romance Writers, a panelist at the 2017 Los Angeles Times Festival of Books and recipient of the 2018 Donna Hill Breakout Author Award, Reese is an advocate for the romance genre and diversity in fiction. A Midwesterner with deep Southern roots, Reese currently resides in semi-small-town North Carolina where she's an avid reader, a music junkie, and a self-declared connoisseur of cheesy grits. Her newest book is Second Chance on Cypress Lane.