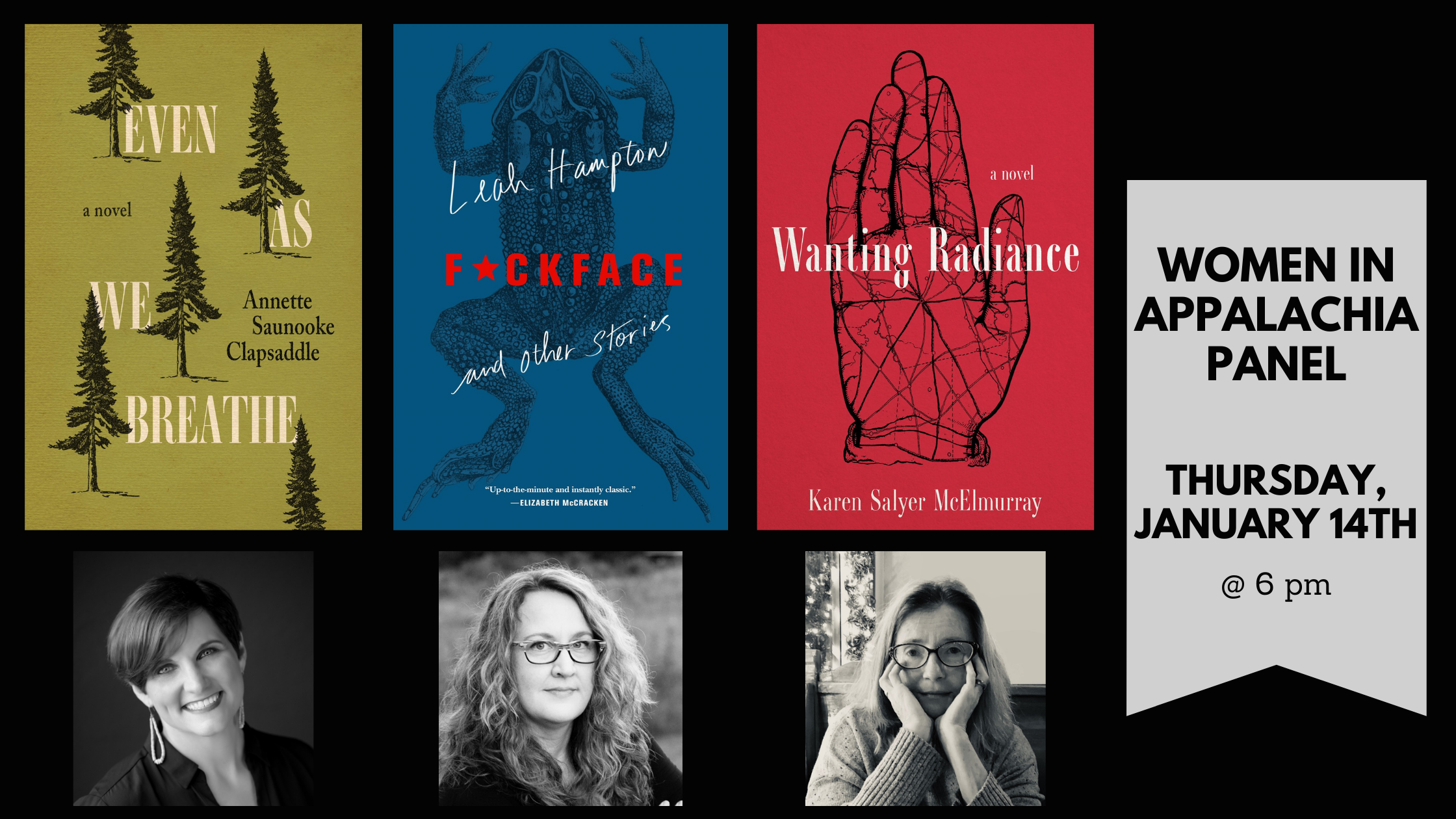 Flyleaf presents three Appalachian women writers for a conversation about identity, place, and their recent works.

Scroll to the bottom of this webpage to purchase the featured titles.

About Even As We Breathe:

Nineteen-year-old Cowney Sequoyah yearns to escape his hometown of Cherokee, North Carolina, in the heart of the Smoky Mountains. When a summer job at Asheville's luxurious Grove Park Inn and Resort brings him one step closer to escaping the hills that both cradle and suffocate him, he sees it as an opportunity. The experience introduces him to the beautiful and enigmatic Essie Stamper -- a young Cherokee woman who is also working at the inn and dreaming of a better life. With World War II raging in Europe, the resort is the temporary home of Axis diplomats and their families, who are being held as prisoners of war. A secret room becomes a place where Cowney and Essie can escape the white world of the inn and imagine their futures free of the shadows of their families' pasts. Outside of this refuge, however, racism and prejudice are never far behind, and when the daughter of one of the residents goes missing, Cowney finds himself accused of abduction and murder. Even As We Breathe invokes the elements of bone, blood, and flesh as Cowney navigates difficult social, cultural, and ethnic divides. Betrayed by the friends he trusted, he begins to unearth deeper mysteries as he works to prove his innocence and clear his name. This richly written debut novel explores the immutable nature of the human spirit and the idea that physical existence, with all its strife and injustice, will not be humanity's lasting legacy.

Annette Saunooke Clapsaddle, an enrolled member of the Eastern Band of Cherokee Indians (EBCI), holds degrees from Yale University and the College of William and Mary. Her work Going to Water won the Morning Star Award for Creative Writing from the Native American Literature Symposium and was a finalist for the PEN/Bellwether Prize for Socially Engaged Fiction. She is coeditor of the Journal of Cherokee Studies and serves on the board of trustees for the North Carolina Writers' Network. She resides in Qualla, North Carolina.

The twelve stories in this knockout collection—some comedic, some tragic, many both at once—examine the interdependence between rural denizens and their environment. A young girl, desperate for a way out of her small town, finds support in an unlikely place. A ranger working along the Blue Ridge Parkway realizes that the dark side of the job, the all too frequent discovery of dead bodies, has taken its toll on her. Haunted by his past, and his future, a tech sergeant reluctantly spends a night with his estranged parents before being deployed to Afghanistan. Nearing fifty and facing new medical problems, a woman wonders if her short stint at the local chemical plant is to blame. A woman takes her husband’s research partner on a day trip to her favorite place on earth, Dollywood, and briefly imagines a different life.

In the vein of Bonnie Jo Campbell and Lee Smith, Hampton writes poignantly and honestly about a legendary place that’s rapidly changing. She takes us deep inside the lives of the women and men of Appalachia while navigating the realities of modern life with wit, bite, and heart.

Leah Hampton writes about Appalachia, corpses, ecoanxiety, and smart women. Her debut collection, F*ckface and Other Stories, was released by Henry Holt in 2020. A graduate of the Michener Center for Writers, she has been awarded UT-Austin’s Keene Prize for Literature, the James Hurst Prize for Fiction, and the Doris Betts Prize, and has held fellowships at Hedgebrook, the Adirondack Center for Writing, and the Stadler Center for Poetry at Bucknell University. Her work has appeared in Ecotone, McSweeneys, Electric Literature, storySouth, LitHub, and elsewhere. She lives in the Blue Ridge Mountains.

Miracelle Loving's world comes crashing down when her mother, Ruby, is murdered during a fortune-telling session gone wrong. Not that she had much of a stable world to lose in the first place; the free-spirited mother-daughter duo had never remained in one place for very long. Without the guidance of her mother, Miracelle grows up following the only path she knows, traveling from town to town, sometimes fortune-telling, picking up odd jobs to fill the time and escape the ever-present lostness she can't seem to run far enough away from.

Uncertain of what she wants and, indeed, whether she wants anything or anyone at all, the now thirty-something-year-old finds herself working as a card reader in a Knoxville dive bar, selling fictions as futures, when she is confronted with her mother's ghost voice promising to reveal the truth about her shadowy past. Desperate for answers, Miracelle sets out on a magical road trip unlike any other, in search of her own story and a father she's never known.

Following snowy highways and backroads, Miracelle stumbles across a museum of oddities and a hole-in-the-road town called Radiant, ultimately wandering into the town of Smyte, where she begins waitressing at the Black Cat Diner. Here, she befriends card-playing has-been Russell Wallen, whom she joins for a series of nighttime adventures, long drives, and after-dark visits to a Holy Roller church. This mythical journey uncovers family secrets and forgotten truths, transforming a familiar story of love and betrayal to reveal the binding power of magic and memory.

Karen Salyer McElmurray’s memoir, Surrendered Child: A Birth Mother’s Journey, was an AWP Award Winner for Creative Nonfiction.  Her novels are The Motel of the Stars, Editor’s Pick by Oxford American and Strange Birds in the Tree of Heaven, winner of the Chaffin Award for Appalachian Literature. She has co-edited, with poet Adrian Blevins, an essay collection called Walk till the Dogs Get Mean: Meditations on the Forbidden from Contemporary Appalachia.  An essay collection called Voice Lessons is currently under contract with Iris Press. Wanting Radiance, her newest novel, was released in April 2020 from University Press of Kentucky.

Even as We Breathe (Hardcover)

F*ckface: And Other Stories (Hardcover)