Order your book through Flyleaf for a 10% discount--just mention the event in your order comments. 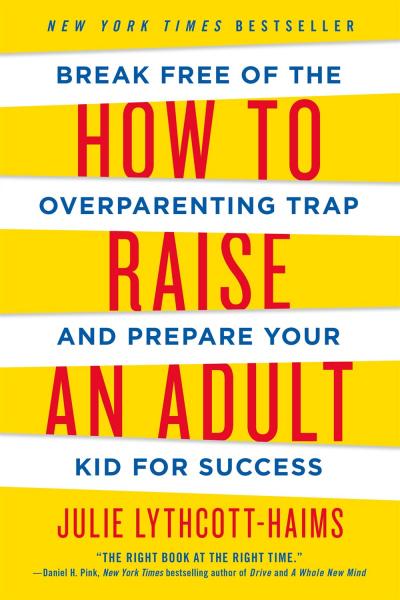 Across a decade as Stanford University's dean of freshmen, Julie Lythcott-Haims noticed a startling rise in parental involvement in students' lives. Every year, more parents were exerting control over students' academic work, extracurriculars, and career choices, taking matters into their own hands rather than risk their child's failure or disappointment. Meanwhile, Lythcott-Haims encountered increasing numbers of students who, as a result of hyperattentive parenting, lacked a strong sense of self and were poorly equipped to handle the demands of adult life.

In How to Raise an Adult, Lythcott-Haims draws on research, on conversations with admissions officers, educators, and employers, and on her own insights as a mother and as a student dean to highlight the ways in which overparenting harms children and their stressed-out parents, and our society at large. While empathizing with the parental hopes and, especially, fears that lead to overhelping, Lythcott-Haims offers practical alternative strategies that underline the importance of allowing children to make their own mistakes and develop the resilience, resourcefulness, and inner determination necessary for success.

Relevant to parents of toddlers as well as of twentysomethings--and of special value to parents of teens--this book is a rallying cry for those who wish to ensure that the next generation can take charge of their own lives with competence and confidence.

JULIE LYTHCOTT-HAIMS served as dean of freshmen and undergraduate advising at Stanford University, where she received the Dinkelspiel Award for her contributions to the undergraduate experience. She has spoken and written widely on the phenomenon of helicopter parenting, and her work has appeared on TEDx talks and in The New York Times and the Chicago Tribune, among other media outlets. She resides in Palo Alto, California, with her husband, their two teenagers, and her mother.

How to Raise an Adult: Break Free of the Overparenting Trap and Prepare Your Kid for Success (Paperback)